This is quite a difficult subject; how domestic cats affect the population sizes of wildlife. We know that domestic cats that are allowed outside can and sometimes do attack and catch small animals. These are  mammals and birds usually. A lot of people who don’t like cats tend to produce data that more or less says cat preying seriously affects the population sizes of native wildlife and for that reason there should be a serious and concerted attempt to reduce cat populations. In plain language lets kill cats because they kill wildlife. See for example: Shooting feral cats (USA) and Ground shooting of feral cats (Australia). See also the LA Supreme Court case: Feral cats of Los Angeles. I realise that the linked articles are about feral cats but the general principles are the same. 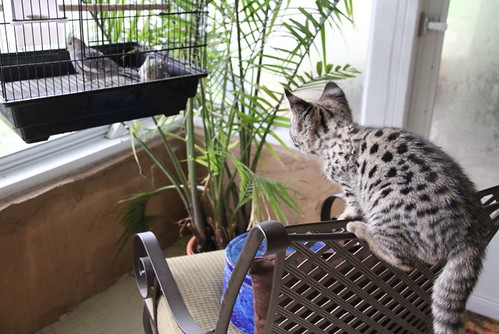 The truth is that it is extremely difficult to find accurate and truthful data on this subject. And we know the old adage, “Lies, damned lies, and statistics”. Statistics can be used to serve an objective.

I have always felt that the domestic cat does not have an negative impact on wildlife to the point where it should be a concern. For this post I have bought (at the princely sum of $47 – not cheap) access to a research study entitled: Impact of predation by domestic cats Felis catus in an urban area by Philip J Baker et al from the School of Biological Sciences, University of Bristol in the UK. The paper was bought from the Wiley Online Library. The idea is to find a definitive answer to the question: “do domestic cats kill sufficient wildlife such that it should be a concern to us?”

This is a scientific study and hard to read so I will simply attempt to provide a reasonable résumé of the document remaining as objective and unbiased as I can in the process.

The study was carried out by asking people in an area of Bristol (UK) to complete a questionnaire about the number of animals, dead of alive, brought back to the house by their cat if they had a cat. 3,494 questionnaires were handed out and 1243 were completed amounting to a 36% response rate.

The survey produced the following data (this is a summary):

The conclusion of the study was, “Collectively, despite occurring at very high densities, the summed effects on prey populations appeared unlikely to affect population size for the majority of prey species..”

In short, I read this as saying that domestic cat preying does not affect the population of the animals it preys upon.

It is also interesting to note that the “majority of cats (51% in spring and 74% in winter) failed to return any prey. In other words most domestic cats don’t catch wildlife. My lady cat who is 18 has caught one mouse her entire life and she didn’t eat it!

It is also interesting to note that of all the households that took part in the survey (89) 52 households containing 77 cats killed 212 animals. This represents 78% of all the killed animals. The total number of cats in the survey was 131. Accordingly 59% of the cats killed 78% of the prey. Clearly as mentioned some cats are hunters and some are not interested confirming once again that cats are individuals.

A previous post on this subject and which I would ask visitors to read in conjunction with this one, came to similar conclusions: Domestic cats do not deciminate bird populations. This earlier post recites an RSPB study that concludes that cats prey on dying and sick mammals and birds which would have died anyway. And as can be seen by the above data the domestic cat prefers to prey on ground dwelling animals as they easier to catch. That should silence the bird conservationists who tend to criticise the cat unjustifiably.