I see videos on YouTube were a domestic cat encounters a wild deer. This is probably not uncommon in the United States and other countries. Deer stray into suburbia and outdoor cats stray into the path of deer. What happens next?

Well it is not a fight as the video makers so often like to claim. I find it a little annoying that the human likes to try and sensationalize what is a benign and often gentle encounter.

The deer and domestic cat are not foes. The deer is a herbivore and the domestic cat, although a carnivore and predator, will not prey on deer! This creates a nice balance in their relationship, despite the size difference, it seems to me. There is a curiosity from both parties. The domestic cat is used to living with giants.

I’ll present a video that supports my assessment. I don’t like embedding videos because often they get pulled off YouTube and don’t work anymore. But this is a nice example of a meeting that shows the cat being naturally wary because of the relative size difference and the deer wanting to get to know what a cat is and does.

If a deer attacks a cat or a dog it is probably to protect its offspring. A deer fights with its legs, trampling on the other animal.

There is a potential for a deer and a domestic cat to form a friendship. I see them both as gentle animals. That might surprise people. The domestic cat in the right environment is essentially a gentle companion. If not, it will be the fault of the person looking after the cat.

Here is an example of a tender friendship between deer and cat: 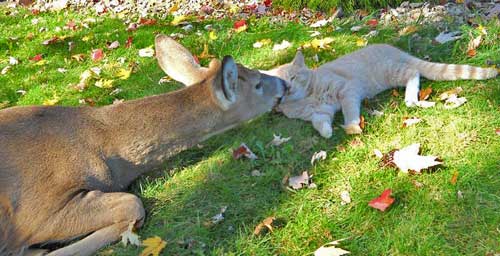 You can see another picture on this page, with links to other inter-species relationships. The human has a tendency to be a highly aggressive predator. This colors how we look at the world, converting innocent encounters into violent attacks when this is not the case.

The greatest barrier to living in harmony with nature is our ignorance of nature.

My thanks again to DW (Dorothy) for finding the video.