↓
Home→Uncategorized→Domestic Cats and Wild Cats Bump Into Each Other

Domestic Cats and Wild Cats Bump Into Each Other

In the USA the domestic cats and wild cats bump into each other because they sometimes share the same trails and habitat areas.

Of course I am talking about indoor – outdoor cats. A major reason why there is an increased possibility for both wild and domestic cats to meet is because of the gradual urbanisation of the USA.

As good old human builds more homes and expands towns as a result of population growth, the habitats of the wildcats shrinks and becomes fragmented. This forces domestic and wild cat together.

It also forces the wild cat to bump into Mr Human on more occasions too, with the almost inevitable consequence that the wild cat loses out, with its life.

Roads have a habit of cutting habitat into parcels and they prove fatal often to wild and domestic cat alike. The kind of wild cats that I am talking about are pumas and bobcats. 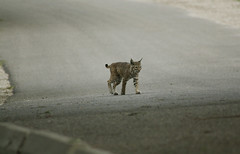 Bobcat on a road in California
by enough (Flickr)

It seems that some diseases can cross the domestic to wild cat bridge. Although wild cats and domestic cats have their own strain of he well known Feline Immunodeficiency Virus (FIV). On that basis I presume that it does not cross species. FIV is the cat equivalent of human aids.

The research is being carried out by Colorado State University researchers using GPS positioning devices (collars on the cats) and multiple camera traps (automatically triggered cameras that capture the cats on their trails as they pass through). Forty cameras in Colorado’s Western Slope captured all three species of cat.

People who advocate full time indoor cats will find these early conclusions supportive of their ideas. But I would have thought that wildcat and domestic cat rarely get into fights. I would suspect that if a wild cat such as a bobcat, which is considerably larger than a domestic cat, met a domestic cat it would simply ignore the domestic cat. So the threat to the domestic cat is not being attacked by a wildcat but the spread of disease from the wild cat. In fact the greater threat is transmission the other way from domestic to wild cat as all wild cats are vulnerable to extinction, some more than others, while the domestic cat population is expanding. For example there are about 150 million domestic cats (estimated) feral and domestic combined and an estimated 10,000 pumas (mountain lions) in Western USA in the early 1990s. This shows the sharp differences in population size.

In fact the domestic cat population is too large in the USA as people kill over 2,000,000 each year in “shelters”.

As urban sprawl impacts on the wild cat habitat, fragmenting it, problems can only get worse.

The bottom line answer is to tackle the root cause of these problems, human population growth. That though is a taboo subject as it smacks of social engineering and we can’t talk about that can we…

One last point, the encounters between wild and domestic cat can lead to matings and wild cat hybrids. Wild cat hybrids are also deliberately created for commercial reasons.