I would like briefly to bring up this very difficult subject again as it is in the news. I don’t wish to upset the Chinese and/or other Asian people some of whom eat dog and cat but I think it needs to be stopped because to me it seems very wrong.

I have already addressed this subject before. A story in the Times has prompted me to write about it again because I think that it will stop one day but that day is in the distance.

There are a fine group of at least 200 animal rights activists in China who wish that the eating of dogs and cats stop. They appear to be brave people because we know that both animal and human rights are almost non-existent in China. Eating dogs and cats is legal and acceptable in parts of China. On this occasion a consignment of 450 dogs were being transported by lorry from Henen province (central China) to a restaurant in Jilin. 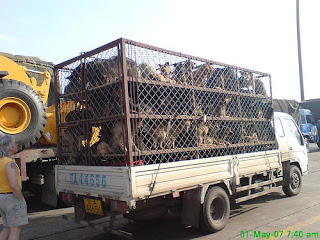 Lorry transporting dogs
See pictures of animal abuse.
The activists stopped the lorry in east Beijing and refused to let it pass. There was a 15 hour standoff until the activists bought the 450 dogs for a reputed £12,000 – almost £27 per dog. That is a large sum of money in China. It seems that the activists are well funded. The price must reflect the value of the dogs to the restaurant owner. There is a lot of money in dog and cat meat. If the entire consignment was for a single restaurant they must have a very large storage facility to keep the dogs (and cats?) alive until slaughtered.

An estimated 200,000 dogs and cats are eaten in Shanghai yearly.

There have been other similar cases of cat and dog rescue by I presume the same group.

The culture or mentality that allows a kitten to be tied to a pole for its life is the same one that allows dogs and cats to be maltreated before being often slaughtered in a brutal manner and eaten for some mistaken medical benefit.

My argument as to why it is wrong to eat dogs and cats is this. Dogs and cats are recognized the world over as companion animals. We have agreed to that state of affairs as have the animals. To turn on them and kill them for food is a breach of that moral agreement. They are not livestock. If they were they would be better treated probably, although in China they even farm tigers, the proud and popular biggest cat species.

Eating dogs and cats is supported by a similar mentality to that which allows cats to be declawed. There is a complete lack of empathy with animals and a culture that says that the human is king and he can do as he pleases. He cannot.