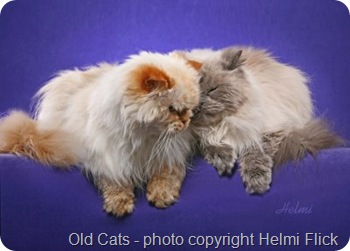 I know about elderly cat health problems and the human stuff too. Back in 2009 my cat and myself were both elderly or getting that way. My cat was 16-17 years of age (I rescued her so I was not sure of her age) and I was three score years (at Nov. 2009). The cat’s body functions generally start to fail or are more likely to fail in old age. The average genetically healthy cat might live to about an average of 15+ years and beyond sometimes. There are two tables at the base of this page showing human to cat comparison in respect of age and the ages of different types of cat.

Obviously cats age at different rates. The ageing process depends on genetics (purebred cats are likely to live less long on average than a moggie, for example) and the circumstances under which the cat lived throughout its life (e.g. food and stress or indoors or out). It is argued that the latter is more important in respect of elderly cat health problems than the former.

Some veterinarians would consider cats over aged 9 as “geriatric cats”. I don’t think this is correct from my observations. Is it true that USA vets expect cats to live shorter lives? I am not sure.

An article on elderly cat health problems should look at just those i.e. health problems that are specifically linked to age and not a disease that can affect a cat of any age.

One obvious sign of old age is a loss of flexibility, which is exacerbated by a loss of energy levels and the use of limbs. My girl cat walked stiffly and sometimes with a slight limp. Joint stiffness is also exacerbated by cold so a warm bedding area that is soft and welcoming is a small thing we can do to ease things along.

A certain amount of exercise becomes more important in advanced age. Some moderate play time can assist your cat. Lack of activity while eating the same amount of food as usual will lead to an overweight cat, which can shorten lifespan and complicate kidney disease, a common problem in elderly cats.

Diet is important as a less active cat obviously requires less calories (about 30% fewer, apparently). It is up to us to manage the diet, either in the quantity of food put out and/or its type. There are numerous elderly cat foods that are produced commercially. For example, extra vitamins are needed as some water soluble vitamins such as vitamin B can be flushed out if the cat has kidney disease causing increased urination. Digestives such as Prozyme, a natural enzyme food supplement can aid poor digestion (book 6 Medical References and Methods). I think this is available in the US and UK.

Old cats have difficulty grooming to a good standard because of stiffness; certain areas on their body become inaccessible. Old cats are more prone to be tired and run down which can also mean less grooming. The result is a coat in poor condition unless we assist by routine and regular grooming and cleaning if required.

Although I have never seen it, a coat in very poor condition that is matted etc. can attract flies, which results in maggots in the coat; sounds disgusting (book 1 Medical References and Methods).

Conversely older cats are more prone to over grooming sometimes (but not all over the body). There is often an underlying emotional cause to this. Over grooming can be due to a hormonal deficiency or emotional imbalance. Please see Feline Endocrine Alopecia (new window – to subdomain).

I tended to groom my old girl several times a day. She got quite twitchy actually and disliked being flea combed, while Charlie a younger boy adored both. This may be simply because she was a bit cranky in her old age. Her skin looked alright and fleas were controlled.

Grooming an old cat revels possible skin disorders, tumors or parasites (please see Cat Parasites). Cleaning the coat of an elderly cat with a damp cloth is recommended (book 1). Despite being cranky the more I groomed my old cat the more relaxed and content she became and it helped to keep harmony in the home. A happier cat is more likely to take pride in her condition and groom more.

If you trim your cat’s claws routinely, it may be necessary to do this more frequently as less activity leads to less wear to the claws.

A deteriorating sense of smell and poorer eyesight go with the territory of old age. Cats rely a lot on their sense of smell to gauge whether the food is attractive. Loss of smell can lead to loss of appetite and weight. This is something to watch for. A cat food change (to better food!) might help.

Cats can cope well with poor eyesight by compensating with their other senses that become heightened. (here are two blind cat pictures and commentary on different pages, by the way: Blind Cat and Blind Cat Dignity).

affect the majority of elderly cats. There would also seem to be a greater possibility of suffering from urinary tract infections in old age. Both these may show as increased frequency of urination and/or going to the toilet outside the litter. One symptom of kidney disease can be weight loss, a common cause in elderly cats.

Reduced kidney function should mean an adjustment in diet to ensure that the diet is not too rich in meat (protein). Although phosphorus is an ingredient in cat food that is important (vital for various metabolic processes – book 7), it speeds up kidney failure, it is thought. Accordingly, the amount is reduced in cat food that is prepared for elderly cats (e.g. Hills Feline k/d).

A body function that can start to malfunction is the bowl action causing constipation exacerbated by lower activity levels and weaker abdominal walls. If the older cat tends to drink less this can lead to harder stools as well. Hairballs can be a greater problem than normal (Home Treatment for Cat Constipation).

Teeth (decay) and gums (periodontal disease) are often one of the elderly cat health problems. The signs of these health problems may be poor eating (painful to use mouth), bad breath, drooling and weight loss. (Signs of Cat Mouth Disease

— Some Symptoms to Look Out For —

High temperature could indicate inflammation of an organ, which in the old cat are most likely to be the kidney and/or liver (Cat Temperature).

Loss of appetite/weight – see above.

is indicated on vets advice.

Constipation or diarrhoea – see above.

This is almost an exclusive elderly cat health problem, occurring in cats over 12+ years of age. Is is caused by an excess of the hormone thyroid. It is the most common hormone disorder for cats (book 1). The symptoms resulting from increased metabolic rate are due to the presence of thyroxin (thyroxine) (abbreviated as T4) and include:

As one of the elderly cat health problems, the effect of thyroxin on the heart is important as the elderly cat’s heart is weaker but the T4 increases its work rate, which can lead to heart disease (Cat Heart Murmur Symptoms).

The condition is treatable and a vets intervention is necessary.

Leave a Reply to Frances A Danna Cancel reply