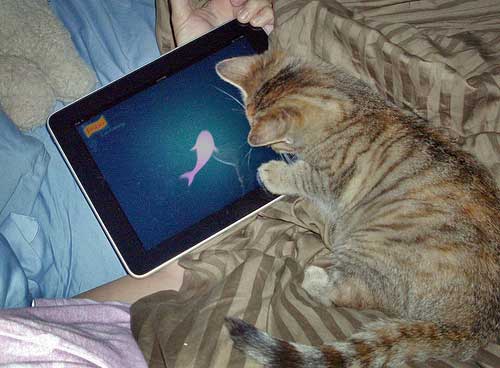 As far as having an addiction to felines is concerned, it doesn’t take rocket science for anyone to figure out that this writer is not alone in suffering the symptoms of this delightful condition; one, for which thankfully, there is no available cure. Once we are smitten by an adorable ball of fluff purring loudly in our ears, I am afraid we are doomed forever.

I will also bet my bottom dollar that many of those of us who are willing to admit freely that they are addicted to kitties will cop onto the fact that we also possess an inherent tendency to be on the lookout for interesting items with which our cats will become enthralled. After all, is there anything more important than finding creative ways to spoil our cats?

While I am not at all embarrassed to reveal my addiction to the feline species; at the same time I am compelled to admit that I am also addicted to things electronic. All smart phones, personal digital assistants, computers, laptops, digital video recorders and anything that requires a battery to make it work holds a great deal of fascination for this cat lover.

It seems that I am particularly attached to my iPad. I use it all the time. So one day while I was scrolling through the App Store I ran across a free cat game intended just for kitties, my curiosity was greatly aroused and I could hardly restrain myself from downloading it immediately.

First of all, I gotta say that I was not in the least disappointed when I started playing with this unique piece of software. And when I unleashed the game on the cats, I was thrilled with their reaction; they went completely bonkers over it.

Once they got the hang of it, they began chasing the flashing mice and bright colored balls racing around the screen. Their little ears darted to and fro, listening intently to the sounds emanating from the screen. They even appeared to be in competition with one another to see who could first catch the electronic rodents.

Dr. Hush Puppy, a cat who generally is somewhat dubious about new things was immediately deeply into the game at full speed. He even racked up an amazing score! On the other paw, Sir Hubble Pinkerton, who is a skeptical kitty – frowning down upon any intelligent feline who would spend hours contentedly chasing an elusive red spot on the carpet from a laser toy, quickly grasped the game’s concept. He quickly got his moves down pat and aced his level in record time.

I must say that Nate Murray, the game’s designer, has created a cat magnet extraordinaire. In fact, one reviewer of the game commented, “My cat won’t give me my IPad back.”

Cat lovers with an iPhone or an android smartphone will get a huge kick out of their cat’s reaction to the Cat Meow ring tone. It features the sound of a kitten mewing, which escalates until it is answered.

For Simon’s Cat fans using an iPhone and/or iPad, there’s an “app for that” as well. “Simon’s Cat in Chat” is a game in which players do battle with an ill-mannered hedgehog. Available at a bargain rate of 99 cents, it’s fun and easy to play.

Watch the video uploaded to YouTube by simonscatextra to catch the action.