Results of a poll on the endangered cheetah 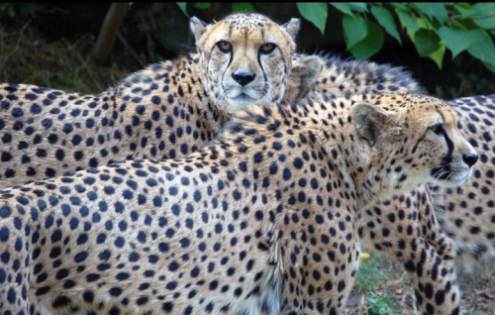 Endangered cheetah – photo © digitalART (artct45) modified slightly as allowed under the creative commons license. The black frame has been removed and the picture cropped top and bottom slightly. The image quality is reduced to make a smaller file size for faster loading. Nice photograph even when modified like this.

The cheetah is not only beautiful in appearance. The greater beauty is in this cat’s actions; raising the simple action of running to an art form. This wild cat’s athletism in running is second to none.

The reason why beauty is destroyed including the endangered cheetah is because we, as a world, act in individual self interest. And the decision to decide what best serves self interest is based on short term gain. People like and liked the cheetah skin, the coat (no longer the case?). People need to take the cheetah’s land to farm. There are more and more people. The decision making process lacks vision, enlightenment and is quite myopic.

There is also a disregard and disrespect from large sections of world communities for nature; that which is natural. Humankind is sometimes fearful of nature and likes to control it, cut it down or kill it.

It is this fear, myopia in decision making and lack of worldwide co-ordination in decision making, that kills the cheetah and makes it the endangered cheetah; joining the ranks of many, many other species that have or are gradually becoming extinct.

It is not all bad, though, is it? This shows how the relationship can be.

It is instructive to compare the plight of the cheetah, which is heading towards extinction with the domestic cat; more particularly the purebred domestic cat. Breeders of purebred cats aim to meet the breed standard as set out by the relevant cat association. Underpinning the breed standard is a desire for the cat concerned to be interesting and beautiful; at least attractive. So in the richer West we are breeding cats that are attractive and in the poorer East we are killing cats that are attractive. In the richer West there are arguably too many domestic cats. In the poorer East there are too few wild cats.

The difference is that the former is domesticated and will act in a general sense as we dictate and the latter is wild and must act as he/she pleases. If we are in control we promote it and allow it. If is is wild we need to control it or we destroy it.

Further, we control domestic cats to the extent that we can keep them indoors permanently (unfortunately we created an environment where a domestic cat going outside is dangerous).  Indoors is a very small range for a cat to move around in. 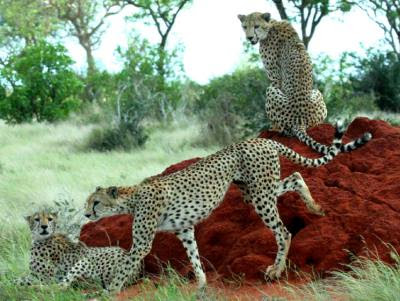 The wild cat needs much more space and we cannot afford to give away this space because of uncontrolled population growth in areas where the cheetah makes her home. The male cheetah needs a range from about 35 square kms to 160 square kms. This need for a large range may have contributed to the cheetah’s problems. However, in essence we have created a world that is suited to humans and not wildlife. In addition the cheetah suffered a catastrophic loss of population some 10,000 years ago which has compounded today’s problems.

The cheetah in Africa is now found in Zimbabwe (3rd most important for the cheetah), Botswana (2nd) and Namibia (1st).

What about some detail? Namibia is the number one habitat for the cheetah. This is probably because it has the second lowest density of human population in the world after Mongolia. (src: Wikipedia). But as elsewhere in the world these underpopulated places are changing (see chart below).

There was a large but now sharply diminishing cheetah population in Namibia. The main reason is that, due to an earlier loss of cheetah habitat, this wild cat now shares land with humans – a fatal situation, obviously (for the cheetah). It is simply dysfunctional and the situation has probably gone past the point where it can be recovered. We cannot blame the farmers of Namibia. At this very late stage in the reduction of the habitat of the cheetah, we need to better encourage Namibian framers to protect the cheetah by better protecting their livestock. One major problem is the poor protection by farmers of their livestock (against predators generally). Rather than killing wildlife it would be better for all to separate wild from farm animal (now that we have put the two together).

Bizarrely is seems that easing the restrictions on “big game hunting” (trophy hunting) may protect the cheetah (this is indicative of the dire state of affairs). This is because the profit gained by allowing rich westerners to game hunt provides ample financial compensation for livestock loss. Of course the cheetah still loses. Any process to protect the cheetah will at this late stage in developments be second rate because we are simply fire fighting.

If Namibian farmers are killing cheetah on the pretext that the cheetah is killing livestock it seems to me that it may be financially viable for the authorities to compensate the farmers for that loss as in the long term it may and probably would result in long term gain financially for Namibia in terms of tourism. Adult cheetahs are killed by humans and 92% of cheetah cubs are killed by other predators such as lions. The cheetah lives an uncomfortable life in the parks because it seems of the compression of predators into an artificial environment.

Let’s look at some figures on populations because for me this is the central cause of the problem.

Endangered cheetah – This chart, the figures, for which, come from the CITIES Kyoto convention of 1992, shows the numbers of cheetah shot by farmers (blue), the numbers trophy hunted (red) and the numbers exported. The decrease in numbers over a relatively short period is indicative of an acute cheetah population decline.

Chart showing the decline in cheetah population throughout the world. Predicted extinction of population is sometime around 2015. Clearly these are predictions only. It would seem likely that the species will survive but only in limited surroundings. And this is provided captive breeding goes well.

Apparently cheetahs don’t breed well in captivity. Yet the De Wildt Cheetah and Wildlife Trust have been successful apparently.

I have obviously simplified things. The problem of the endangered cheetah is quite complex but the underlying problem must as stated be about human population growth. It does seem extraordinary that we are unable to manage what is a tiny population of about 10,000 cheetahs worldwide when we are a population of some 6.6 billion. But then there lies the problem….

From Endangered Cheetah to Cheetah Facts