This is an essay on feral cats. It is written in general terms and for anyone. This is a large subject so it is impractical to incorporate a lot of detail. Anyone can use it as they please under a creative commons license.

In many ways, feral cats are just like domestic cats. Many of them were domestic cats until they were abandoned and became wild, surviving in a difficult environment outside the human home.

The word “feral” means existing in an untamed state or becoming untamed after, at one-time, being domesticated. The most important aspect of the subject of “feral cats” is that we, human beings, put them there. We created them. This simple fact should guide us in our relationship with them.

To many people, feral cats are a nuisance. Many people believe that they spread disease and are a health hazard to humans and animals. These people want to be rid of the feral cat because they spoil the amenity of the environment in which they live. Because there is no easy way to get rid of feral cats, often, they simply want to kill them as fast as possible. They want to eradicate them. It is impossible to eradicate feral cats despite the fact that the government of Australia has often made plans to do it. Recently they proposed plans to poison all the feral cats of Australia. They have probably, belatedly, realised that it is impractical to do so.

When you kill feral cats, other feral cats fill the space where they once were. This is called the vacuum effect. So not only is the attempted eradication of feral cats by poisoning or shooting immoral and inhumane, it is also ineffective.

The only current alternative is the well-known humane method of trapping feral cats, neutering them, checking for diseases and perhaps vaccinating them, clipping their left ear to indicate that they have been through the TNR process (trap-neuter-return) and then releasing them back into the wild from whence they came. This method is far too slow for many people and less effective than killing them. In fact, they believe it is worse than ineffective because it leaves feral cats out in the wild where they are miserable, become ill and die a grisly, sad death. Why put cats through that? This is the question asked by a well-known organisation called PETA. Rather surprisingly they want to kill feral cats en masse but their argument is that it is the only humane way of dealing with them. Cat lovers vehemently disagree.

There are many people, often very generous and kind people, who are engaged in the TNR process. Sometimes they are criminalised for their activities because part of the TNR processes includes feeding feral cats and when you feed feral cats people argue that you proliferate the “feral cat problem” because you encourage them to come around. And when they come around into your backyard or the area where you live it upsets people, causing clashes between people with different ideas. This can sometimes lead to criminal proceedings. You can see that the feral cat is a contentious issue and their existence polarises whole neighbourhoods and the legislators of local governments.

In Western countries, the demarking trenches between the warring parties in the feral cat debate usually separates the establishment and the rich on one side who, in general, want to eradicate them and the gentle, caring and intelligent women on the other side who prefer to treat feral cats in a humane manner. There are notable exceptions, one of whom is the co-founder of Apple, Inc, Steve Wozniak.

Today, in the USA, there are many debates taking place in council chambers at state and county level on the subject of how to deal with feral cats. The debates often center around legislation to force more responsible cat ownership with the intention of lessening the number of abandoned cats and whether to fund and promote TNR or, rarely, to try and eradicate the feral cat.

Feral cats get the same sort of diseases that domestic cats get although not much research has been conducted on feral cat health. Feral cats are more exposed to rabies than domestic cats but the dangers of contracting rabies from a feral cat are often grossly exaggerated by people who dislike cats. Often feral cats get a bad press partly because reporters are insufficiently educated about them.

In Australia, they say that their feral cats have evolved to be super feral cats. They say that they have become a real threat to their native wild species because they are very large and very capable survivors. The authorities in Australia almost argue that their feral cats have become a new species of wild cat decimating native species. They guess prey species mortality rates and use the guesstimated figures to vilify the cat.

When a feral cat is taken to a cat rescue organisation or a shelter they are nearly always euthanised.

The photo above is of my domesticated semi-feral cat Gabriel! He is a great cat companion. I socialised him from about 8-weeks-of-age onwards.

Feral cats have the same range of cat coat types as domestic cats. This is not surprising because a lot of them were once upon a time domestic cats. Either that or they were born in the wild but their parents or grandparents were domestic cats.

Cat meat is another contentious issue. The idea that feral and indeed domestic cats can be killed and eaten in restaurants is something that people in the West find abhorrent but which is considered completely normal in parts of Asia. It divides the world. Many people in the West have started petitions on the Internet to stop the cat meat trade. However, it is too big a trade to stop with a petition. It is too financially valuable to the people involved in it. Also the culture of eating cat meat is deeply ingrained. They believe it cures ailments such as arthritis.

In fact, many people in the West including America argue that there is no difference in killing feral cats to eat than there is in killing livestock to eat. There is a difference and it is this: livestock is reared and slaughtered under regulations and under controlled conditions as food for humans. Feral cats were once domestic cats and they are our problem. They are brutally killed in backstreet yards often illegally and under absolutely no regulations or protocols. This is not about livestock but the mass slaughter of cats by insensitive brutal people. 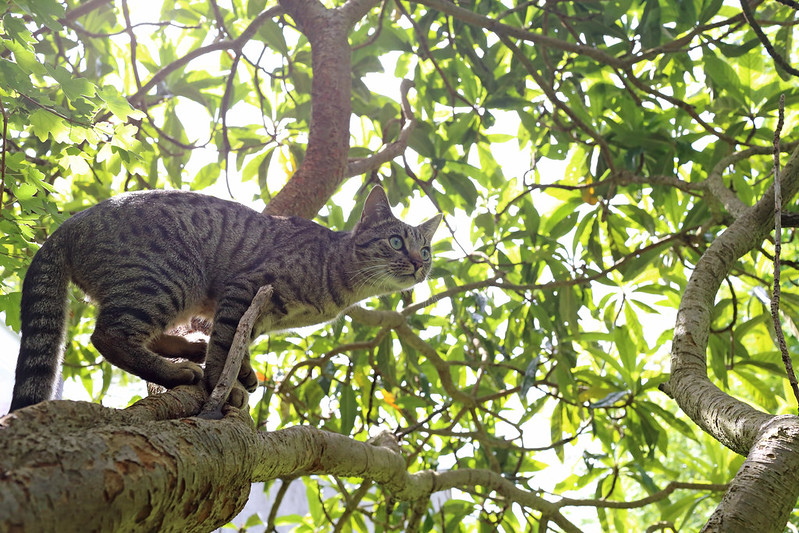 The picture above is of Gabriel again. He is domesticated from semi-feral but a bit more than the usual amount of wild remains.

It may surprise people that there are no animal welfare laws currently in China and if there were they probably wouldn’t be enforced properly. In other parts of Asia there may be some rather weak animal welfare laws but once again they are rarely enforced properly which makes them all but useless. It is within this background that we have to gauge the morality of the cat meat trade and any decent person is compelled to come to the conclusion that it is immoral and inhumane.

It may surprise people that sometimes a feral cat or a semi-feral cat can become a purebred cat. For example the very rare Sokoke which originally hails from the forest of the same name on the east coast of Kenya is a feral or semi-feral cat living in villages in that area. In the West, this is a rare, purebred, pedigree cat. This proves that there is little difference at a fundamental level between a feral cat and a fancy purebred cat.

Sometimes, feral cats can be more purebred than purebred cats. That sounds odd and the reasons behind that statement are complicated and difficult to explain.

I would hope that all people look upon the feral cat as a vulnerable animal needing our help. I would hope that they look upon this cat not as a problem but as an animal that should have had the opportunity to be cared for in the family home. They shouldn’t be there, struggling in the urban wild. We put them out in the cold and we should be kind to them. If people become irritated by them or frightened of them they should stop and think. They should think rationally about their existence and not emotionally decide that they need to be eradicated. We have a duty of care towards all feral cats. If they are a problem, they are a problem of our making.

P.S. If anyone would like to add a passage or a word to this essay please leave a comment and I’ll seriously consider putting it in.