The European Shorthair is a breed of cat that at present (2010) comes third in the trio of nationally named shorthaired cats. The others being the better known American Shorthair and British Shorthair cats. That is not to say that this “ranking” will remain the same. This page is shorter than usual as build time is commensurate to popularity.

This is a relatively little known cat breed that is said to originate in Sweden1 and which is better known in Sweden for that reason3. I suspect that this is incorrect and its place of origin is the European mainland2.

Perhaps it is less well known because the breed is found on continental or mainland Europe (essentially Europe excluding the United Kingdom and Ireland). The UK is the home of the cat fancy and there is arguably less cat fancy activity on mainland Europe.

Another possible reason why the breed has not caught the imagination of the cat fancy is because the mainstream shorthair market is already fully subscribed. Is there really room for a very similar cat to the American and British SHs? Finally, the history of this cat is much shorter. Both the American and British SHs have long histories going back to the beginning of the cat fancy in the late 1800s and early 1900s.

So, notwithstanding the breed occupies a vastly larger area than the UK it is less well known and less popular than the Brit SH. Indeed I have not listed it in the most popular breed poll (probably unfairly).

Until 1982 the British and European Shorthairs were classified together. FIFe, having then classified the breed separately created an instant new breed, which through selective breeding become less cobby than the rather square, slightly flat faced British Shorthair. It is also longer in the body. These differences is it said might reflect the generally warmer climate on mainland Europe and the less cobby cats that occupy it. I think that this cat looks more like the American Shorthair. When breeding this cat today (2010) no British Shorthair crosses are allowed2.

The European Shorthair is a regular looking cat, nicely balanced with similar traits to the British counterpart. It looks like a British random bred cat, in fact – utterly normal in conformation and character (calm and affectionate2 is well socialised). 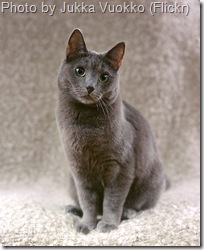 The body is medium to large and well muscled. It is not a cobby cat, however (see cat body types).

The face should “give the impression of being rounded” but be longer than it is wide. The is triangular to rounded with well defined muzzle.

The ears should be medium sized and upright. Eyes: large round and well spaced with a colour that matches the coat. Legs: medium length and muscular. Tail: medium length, thick at base, tapering to rounded tip2.

The breed colours are: (1) the three traditional tabby patterns of classic (blotched), mackerel and spotted coats in brown, blue, red, cream, tortie and blue tortie. The Abyssinian type ticked coat is not recognised. Variations on the tabby coats are naturally accepted and the high contrast silvers are popular2. Tabby markings should be symmetrical (2) Self (solid) colours of black, blue (see picture above right), red, cream, tortie, blue tortie, white (3) Smokes (colours as for selfs and tortie excluding white) (4) Bicolors (standard and Van patterns), colours are all self colours and torties with white.

Pointed European Shorthairs are accepted. These cats look very similar to the traditional Siamese except the “body tends to show more shading”2.

2 The Encyclopedia of the Cat by Dr. Bruce Fogle

(photo half way down page)

From European Shorthair to Home Page