A judge has handed down sentencing to a violent animal abuser. Ultimately this is a happy ending story and I like stories which end happily. Richmond County District Attorney Michael E McMahon declared that Tryike Richardson has been handed down a jail sentence of 15 months. You may remember that he tortured his neighbour’s cat, Chester, and abandoned the cat in a garbage can. 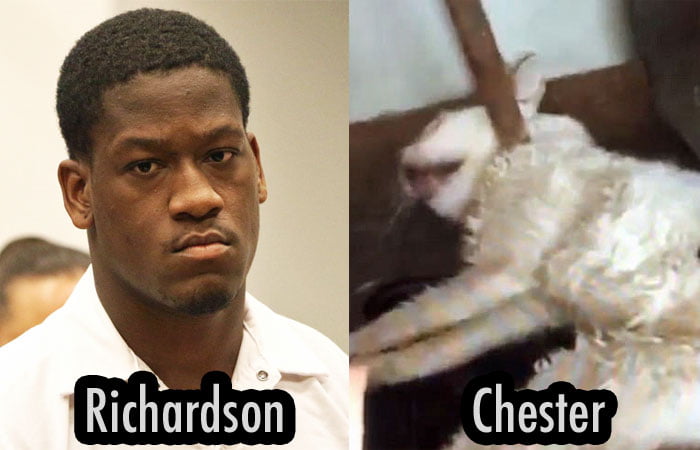 He is one of those incredibly nasty individuals who also found it amusing to video the whole event and uploaded it to Facebook. There are people like him who like to advertise to the world how nasty they are. They think it’s clever. They’re seeking notoriety. They’re seeking to be famous in some sort of crazy way. The 15 minutes of fame that Andy Warhol referred to. When he’s got it at the expense of a cat.

The NYPD of Staten Island Gang Squad saw the video. They were able to rescue Chester from the trashcan. They got him safely to the ASPCA for treatment. They were also able to ensure that Richardson was arrested.

Richardson pleaded guilty because of overwhelming evidence. After all he had videoed himself. Clever boy. He pleaded guilty to aggravated animal cruelty. In addition to jail time he is banned from possessing animals for 10 years. NYC has an animal abuse registry, thankfully. You must register with this registry and pay a judgement order of approximately $8,000 to ASPCA.

The attorney general said that the defendant mercilessly tortured an innocent animal and showed off his sick and twisted actions by posting a video of the incident on Facebook. He said that his department created the Animal Cruelty Protection Unit to hold these sort of people to account.

The ASPCA say that Chester’s injuries included blunt force trauma, a collapsed lung, rib fractures, contusions to the ear, broken teeth, liver and kidney injuries, head trauma and severe muscle injury. An incredible array of serious injuries which he survived with the great care of the ASPCA. Chester has made a full recovery and is being cared for in a loving home. The vice president of ASPCA Humane Law Enforcement said that there is no place in New York City for animal cruelty and he commended the swift actions of the NYPD.

This was a great example of coordinated, joined up actions by a variety of agencies in stamping on gross animal abuse. The nasty people of the world, need to be taught a lesson that it is criminal to upload videos of their own animal abuse to Facebook and other social media websites and that it is not something to be proud of which, it appears, is what Richardson had believed in his extreme ignorance.

Source: ASPCA, PoC and my thanks to Michele Massa.