Here is a live and current example of how, if we are honest, the wrong people can end up looking after domestic cats. Quality of cat care really depends of the quality of the person.

Three years ago, a woman split up with her husband. An ordinary day-to-day occurrence. As is typical in divorces, the spouses had to find new homes and the daughter says she had to rent an apartment and her mother agreed to look after her three cats. Perhaps the landlord forbade cats. I suppose the arrangement was meant to be temporary. 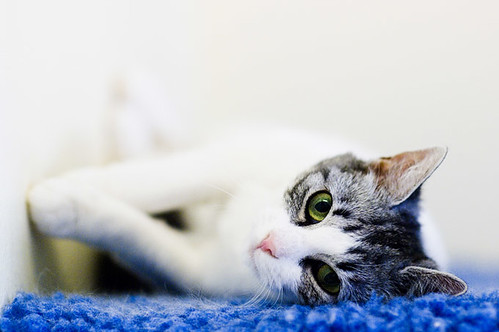 The mother doesn’t like cats but she looked after them and she says, “These cats are good cats and have grown on me…”. She took care of them but hates cat hair all over the house and the fact that they “wrecked the carpet on my steps…”.

The mother wants to renovate her house and at the same time wants her daughter to take the cats back. Her daughter refuses and says:

“How are you going to explain it to the grandkids that you got rid of their pets?”

Emotional blackmail? Mother is fed up. The cats have become a “problem” because neither the daughter nor her mother wants them. It is clear to me that the daughter was unsuitable as a cat caretaker in the first place because she willingly allowed her mother to care for her cats for three years. That indicates to me that the daughter is happy to let someone else do the work of cat caring but, I suppose, from time to time she enjoys some of the fun of being around domestic cats when she visits.

Her mother has done the best she can and admits she is unsuited to the responsibilities of cat guardianship. The wrong people are involved in caring for cats. What can be done?

The cats need a new home. Taking the cats to a shelter does not guarantee a new home in the USA (this is a USA story). It can lead to death.

I would not advertise them on Facebook or anywhere else because the wrong sort of person (again) may con them out of their cats. If the three cats are close friends they should be taken together, which makes it harder to rehome them. Perhaps the best solution is to find a home locally by asking neighbours and friends.

People should be cautious and thoughtful before adopting a domestic cat and even more thoughtful when adding to the family with more cats.

There is one last possibility, which is that the mother learns to deal with a bit of damage and cat hairs. After all, she does say they have grown on her. There is potential there: something to build on. Perhaps a bit of cat behavior education and a rethink may resolve the problem.

Photo: an abandoned cat but not one of the cats referred to in this article. The photo is a direct embed from Flickr and may disappear in the future. Photo by Stefan Tell.

Why are white tigers white?

It is believed that white tigers are white because of the result of a genetic mutation which occurred about 120 ...
Read More

I interpret this captive white tiger's behaviour as indicating that he/she is desperate for company and specifically human company. This ...
Read More

This is a very cute and very short video of a white tiger cub scaring his mother accidentally. You would ...
Read More

This is a striking photograph of a dog mothering four rare tiger cubs: two golden tigers, a snow tiger and ...
Read More

White tigers: the result of generations of unhealthy breeding practices

By Sarah Hartwell I recently drafted the genealogies of white tigers from Mohan in the 1950s through to the zoo ...
Read More

This is a fabulous picture of a white tiger at feeding time in Singapore Zoo. The picture is by Sergey ...
Read More

Why do cats hate tin foil?

Why do cats hate tin foil? Well, we shouldn't generalise because some domestic cats are not fazed by tin foil ...
Read More

Picture of cheetah joining tourists in the Serengeti is unsurprising

There's a picture in The Times newspaper today March 5, 2020 which I have taken the liberty of publishing on ...
Read More

Is Millie the perfect domestic cat?

She is everything a person could wish for in a domestic cat companion. Just everything. Instant friendliness and she was ...
Read More

In a choice, interacting with people beats eating for domestic cats

A study published in August 2017 on the sciencedirect.com website comes to the conclusion that the domestic cat, in a ...
Read More

This is an impromptu test of canine and feline intelligence or perhaps it is not. It seems to have some ...
Read More

What do domestic cats do when humans aren’t around?

ABC News San Diego have commented on an Australian survey of outdoor domestic cat wanderings and their conclusion is incorrect ...
Read More

Should domestic cats be kept indoors or allowed outside?

The answer to the question depends on (1) your personal opinion and (2) where the cat lives. There is no ...
Read More

Is it illegal for cats to roam qld?

'Qld' is a shortened version of Queensland, Australia. So the question is, it illegal for cats to roam in the ...
Read More

These photographs of Swiss cat ladders were taken by Brigitte Schuster (bar one which was taken by Mauro Piccardi/Alamy). I ...
Read More

I’m upset: Cats in the UK continue to be allowed outside despite a warning there are ‘cat killers’ in the neighborhood

I'm upset: Cats in the UK continue to be allowed outside despite a warning there are 'cat killers' in the ...
Read More

Is it legal to let your cat roam freely?

As Internet users ask the question: 'is it legal to let your cat roam freely?' - I feel obliged to ...
Read More

Over half of all animals killed on UK roads are domestic cats?

In a town at the center of England, Tamworth, cats represent over 50% of all animals killed on the roads ...
Read More

This is a doctor (a GP), Linda Smith, living in the country in England who lives near a main road ...
Read More

There has been a big debate on the Internet recently about whether cats should be let outside or not. It ...
Read More