↓
Home→Cat Health→frostbite→Extraordinary picture of cat with 4 artificial legs, no ears and half a tail

Novokuznetsk, Russia – news/opinion story: In freezing conditions, Dymka, a cat who actually looks like a blue British Shorthair but is probably a random bred cat, lost her legs, ear flaps and a good part of her tail to frostbite. It must have been hell. Parts of these appendages were left but they built new legs with the aid of a 3-D printer. The Mirror newspaper say that she is only the second cat to be fitted with four prosthetic legs. The photograph by Kirill Kukhmar/TASS is eye catching. It must have taken a while for the cat to adapt and find her balance.

The cat’s new front and rear paws have an individual model that was printed using titanium on a 3D printer. To reduce the risk of implant rejection by the cat’s body, the TPU scientists applied a microactive calcium phosphate coating through micro-arc oxidation.

Apparently she lives a full life. However, she must have lost some of her athletic skills and it looks uncomfortable. Although she has quickly adapted to her new legs.

I feel that we need to ask if she feels discomfort at best or a degree of pain. I feel that she is in discomfort and stressed but I may be misleading myself. The trouble is we won’t know because cats are good at hiding it. We know that. I wonder whether the stresses of the new legs will hold up. I am referring to the connection between the bone and the artificial legs. It is the kind of thing I’d worry about and we are unlikely to hear about what is happening behind the scenes.

I also wonder how much of the motivation for doing in the operation comes from testing new procedures and overcoming new challenges instead of prioritising cat health and well-being. The point I am making is that I would doubt if a Russian cat owner or the vast majority of cat owners anywhere would have the disposable income to pay full commercial price for an operation like this.

P.S. I have decided that she is female but that’s a guess. If I am wrong, I am sorry.

Can domestic cats survive in the cold?

Yes, of course domestic cats can survive in the cold but it all depends on how cold, how wet and ...
Read More

White cats shouldn't feel the cold more on dull, grey winter days but they may be slightly colder than other ...
Read More

This is the happy ending story of River, a black cat found injured and “clinging to life” in the middle ...
Read More

This is the story of Nativity Grace, a kitten abandoned in a store parking lot in 10-degree Fahrenheit temperature. I ...
Read More 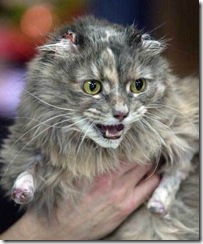 Treatment For Frostbite In Cats

by Michael (London, UK) Frostbite affects the extremities, obviously. These are toes, ear flaps and tail, for example. The fur ...
Read More
Please comment here using either Facebook or WordPress (when available).