I would like to share the experiences and joys that my very special boy, F1 Bengal Cat Callista Strike Force, has brought to my life. When I first saw Striker it was love at first sight. At the time his name was Zephyr and he was born and raised during his first weeks at Callista Bengals, which is owned and run by Julie Calderon. Julie does a fantastic job of raising foundation kittens. I got Striker at 8 weeks of age because they have to bond with the owner first, not the other animals in the household. Striker's parents are Elias Of Callista and Crestwood Patience of Callista. 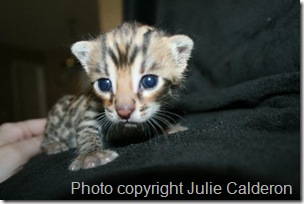 Before I adopted Striker, I couldn't resist looking at Julie's site. The picture that caught my eye was his face and belly. WOW, what incredible spots he had! I called Julie and we talked for what seemed like hours..LOL

The funny thing is I was originally looking for an Aby or Somali to add to my show cats and then I saw him. I remember begging my husband Truong to adopt him and I remember his price which was understandably a lot as he is such a special cat. Anyway I asked my husband again and again, in the same phone conversation, and finally he said "YES!" I also remember being a little afraid. What if I didn't know what I was doing. I had heard rumors about F1's and how they basically have a bad reputation for being tough to handle and that they were more wild than domestic. 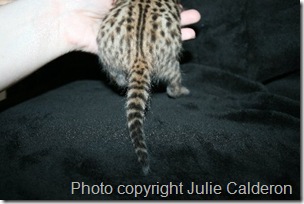 However, Julie told me that it was my rescue work that I did for years that gave her confidence in me. I guess she was impressed by my knowledge of feral's (which helped in raising Striker).

The breeder of my show Bengal (Dillinger - who is and 8th generation) also warned me that it would upset the balance of thing's especially for Dillinger. But it was all about bonding with him and keeping him separated from the other cats from 8 weeks until he has 12 to 14 weeks of age. What came of it was more than just amazing!

I took everything that Julie told me literally, doing exactly as she said. There was no contact with other cats or members of my family for at least for the first 24-48 hours. Fortunately, my bathroom was big enough (you could basically have a picnic in it) as a temporary home for Striker. So I took the seat pad from our outdoor swing and brought it into the bathroom that night. I remember my husband making fun of me for insisting on sleeping on the bathroom floor!

Maybe at the time he was even a little jealous of the total attention and adoration I had for Striker. This is where he got his name Callista Strike Force from - Striker is a force not to be reckoned with...LOL. But really he was a sweetheart from the beginning. Little did I know that even though I had setup a litterbox near the tub and made my bed next to it with comforters, pillows and the likes that he would pee on me because we were so joined at the hip. He slept so soundly he didn't get up to use the litterbox... Boy did I get a rude awakening! I had to get up at 2am and take everything, put it in the wash and start fresh. I just couldn't bear to leave him alone in that bathroom. I had to get special toys that he wouldn't eat because if he digested certain toys it could kill him. And I had to buy special wood pellets (which now all my cats are on because F1's are noted for eating their litter). 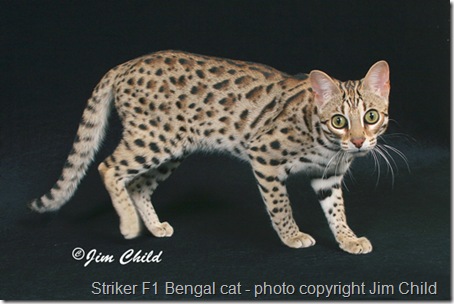 When I took a bath in that bathroom he thought it was so cool that he jumped right in with me and when he pooped in the tub I had to yell for my husband to get him out, drain the tub, clean it and refill it for my bath while my husband played with him! I had to laugh to myself as I remember Julie telling me this could happen, but I guess I didn't realize she meant literally. It was just a natural response, for him, as a throwback to his wild ancestry.

BTW he also fell into the toilet within the first week, which is when I realized why Julie had warned me that F1's LOVE water. Can you imagine Striker swimming in the toilet and then us having to give him a bath! Another funny thing about Striker as a kitten was, God forbid, you should touch him while he was eating his wet food which at first was his primary source of food.

Later we managed to introduce dry which was also something people said couldn't be done, then later raw steak which is such fun to watch him eat. However he would make this funny noise only Julie could probably describe. He doesn't do it anymore, but he would make this type of growly "rorororoummmummmmrororroror" and then if you let him go he would stop. It was not so much growling as happy singing while eating and being so into his food. We would laugh so hard we were almost crying and our sides would hurt. It was so incredibly sweet and amusing.

It's been constant fun and entertainment. Who needs TV with a boy like this? I had no idea in the beginning what I was in for but all the hard work and dedication has made him what he is today. The love of my life and my everything Boy. The sun rises and sets on Striker and everything about him gets better with age. 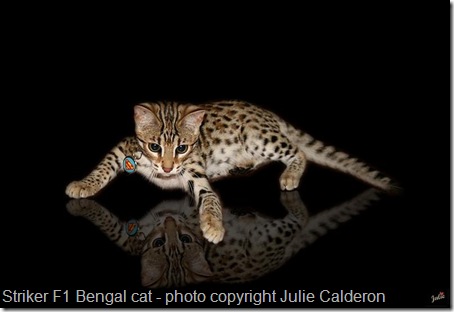 The one thing I remember most was my husband saying to me. "Why do you want to spend so much money on a cat you can't even show?" You can't show anything until the 4th generation I told him right then and there I wanted a leopard cat and wanted to make him special.

A cat that was as wild looking as his father but almost as domesticated as domestic cats people have or can relate to in their homes today. They all said it couldn't be done but two years later he is a Therapy Cat (part of "The Dillinger Gang Therapy Group" for the last year and a half). He visits schools and nursing homes.

A well known photographer, Jim Child, who had never been able to take photos of an f-1, due to many reasons, but not limited to normal f-1 preconceived temperament issues, was able to take some memorable images in what was told to Keira and many others that would never be possible.

A few people who felt it was very important for this photo session to be possible, helped by pulling some strings at a near by show, making it possible for this amazing cat to have professional photographs t aken of him. Jim Childs was thrilled to be able to photograph his first F1 and Striker didn't have to be picked up once; just lifting a toy got his attention and the results spoke for themselves!

Striker is going to be featured as winner of the foundation Bengal contest. Striker continues to love to jump in the water and take baths with me and my kids. He is very bonded with me and sleeps next to my legs under the covers at night and can often be almost dog-like. He was also featured in the local newspaper and Bengals Illustrated, as well. There is nothing like an F1 with small children. Forty-three students at The Waterford Elementary school wrote about meeting with him at our presentation.

I still have the pictures and letters. People said it couldn't be done, he couldn't be domesticated enough to be around young children or elderly. Thanks to Julie and the work we've done with Striker this has become possible. He is also now signed with a Talent Agency in NY and awaiting word on possible print work for the likes of Calvin Klein and others. He is truly a "DreamCat" and will always be my first love :-).