This is a picture, which has gone viral to some extent, of President Trump manfully and heroically wading through Hurricane Harvey floodwater clinging onto a couple of cats (ginger tabbies) which he had apparently rescued single-handedly. A great promotional picture to show the tender side of this dynamic, all-American hero! 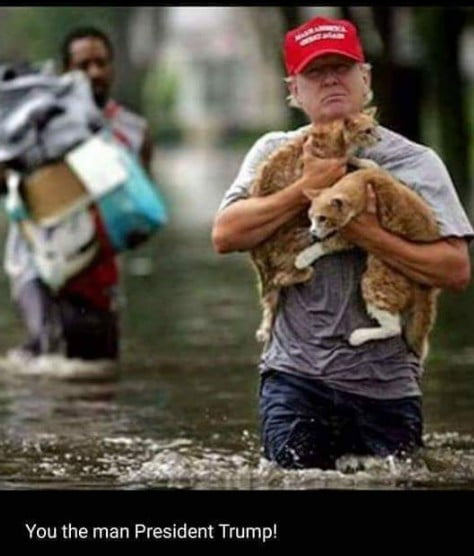 President Trump rescues cats from floodwater. This is ‘fake news’!

As you might have immediately imagined, the photograph has been doctored or in other words edited. It is obvious because Trump has a rather large pot belly and the man in the photo does not. The head of President Trump was placed on the head of Brandon Smith who was indeed rescuing a couple of cats (his cats) from floodwater but it was in 2008 in Cedar Rapids, Iowa. The photographer was Harry Baumert.

Today, Brandon lives with the cats and other pets at a farmhouse near De Witt.

Here is the before and after photograph:

Before and after photos showing editing