It’s true. If you are overweight, even obese yourself, you tend to normalise the extra weight. Obese becomes fat and fat becomes normal and that applies to yourself, other people you see and your pets: cats and dogs.

This is one factor that is fuelling the steady rise in obesity in cats and dogs in the USA. The  other standard reasons for the rise in obesity in pets and accompanying health problems is diet and exercise. Pet food has become more calorific. This certainly applies to the popularity of dry cat food, which is very convenient and cheaper on a daily cost basis. As you probably know dry cat food or kibble as it is referred to has to contain relatively high concentrations of carbohydrates to make the manufacturing process work. One vet thinks that dry at food leaves cats in a state of mild dehydration and slightly hypoglycaemic. 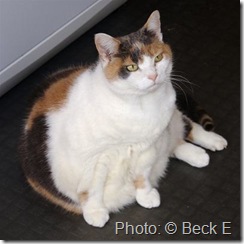 As cats get fatter they exercise less and this compounds the overweight problem. Basically fat cats get fatter on a downward spiral and I am not talking about rich businessmen.

In short when a cat owner becomes obese there is a greater possibility that their cat will become obese too.  Obesity is viral to borrow an internet term.

Here are some startling figures relating to pets in the USA. The figures come from the Association for Pet Obesity Prevention.

People and cats sit around all day and eat poorly, the both! The problem of pet obesity has consistently become  more severe over the last five years.

Being overweight brings similar health problems to both the cat and his or her human companion:

The answer is a strict, consistent and permanent diet, no treats and some exercise. it appears that this regime should apply to both pet and person! As weight decreases exercise increases which speeds up the weight loss process.

The problem of obesity in people also affects the UK albeit to a lesser extent. People in the UK are increasingly becoming overweight. I suspect our cats are too. I guess one benefit of the increased cost of cat food in the UK is that is should put a brake on overfeeding your cat or dog.