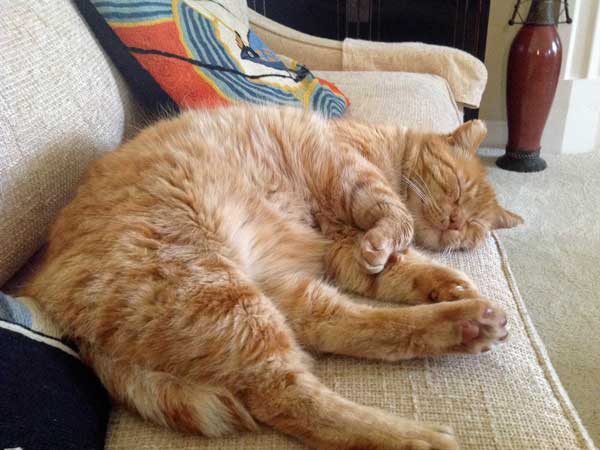 Marvin snoozing on the sofa like a typical domestic cat. Photo by DW.

Marvin, has been officially living with me for over a year now. It is his choice, of course. He spent the first ten years of his life as a colony cat turned TNR cat. He made the transition from feral cat to human-friendly cat quite easily, I am told. In my opinion, he was already top cat and had no reason to fear. He is confident, which helps in making the transition from feral to domestic.

A very wonderful woman, much like our Dee, was feeding Marvin with many other cats on and around the local school property every day. Year after year.

I moved to this town seven years ago, which was a year before I met Marvin. I was walking Daisy early one morning and I heard what I thought was a blood curdling cry of a cat being murdered. I secured Daisy quickly, and ran around the corner, not knowing what I’d find. It is quite rural here, so it could have been anything from a coyote to a cougar!

As it turned out, there was a lady there, with a huge bag of cat food. I asked her what were we hearing? She said, “oh…that’s mine. He’s just loud and happy about breakfast.” I introduced myself. Oddly, her name Is Ginger, and the cat she was referring to, and who she called Orangie, is now my Marvin.

We walked and talked and she told me about the story of getting control of the feral population at the school. I was intrigued. I offered my help any time she needed it. I told her about the yellow cat I was feeding in my back yard. She told me what she knew about Yellow.  She said that Yellow rarely came to feed with the others and that she was a great hunter. She was known for catching rabbits in the school grounds. She was happy to know that Yellow was being taken care of by me.

After a few years, I was doing the feral cat feeding during the weekends. Marvin and I became fast friends. In just about six months, he started following me home. Ginger had said that the school administrators wanted her to spend less time with the cats. As a result she was worried Orangie was getting lonely. So, I told her I was willing to take him full-time and that he was ready to stay at my house. She was thrilled, but teared up just the same.

Photo by DW – that is one awesome scratching post and it is really nice to see him use it.

The rest is history, except for yesterday when Marvin came in early, as usual….then never left the house until nightfall. He fully accepted the noise of the house. The banging around in the kitchen, the phone ringing, the moving here and there and all things normal in a busy house. It made me so happy. Today it rained a little, and he has been inside all day as well.

If this keeps up I’ll have to get a second litter bin!

P.S. Another photo of me and Marvin