Many fine people working in feral cat rescue, either organised or ad hoc, deserve to be recognised for their unstinting efforts. But, and for me this is important, very few get the recognition that they deserve.

As I see it the rescue of feral cats has several components to it. Like any “market” (and it is subject to market forces like all things) there is the supply end and the demand end. In business, supply is the manufacturing and demand is the consumer. In feral cat rescue, supply is abandonment of unneutered domestic cats combined with the exceptional ability of the domestic cat to procreate. While the demand side is the person willing to re-home or rehabilitate a feral cat. The demand side must also include the people who take the euthanised feral cats from the cat shelters. And that has always worried me. What happens to all the dead cats? There are up to 14 million of them in the USA alone although we don’t really know, which tells us a bit about our relationship with the feral cat. 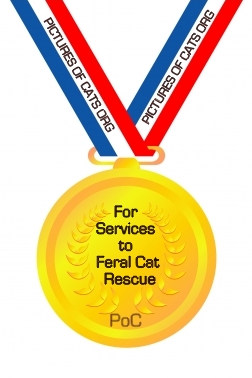 Today, I am more interested in the unsung individual heroines (they are more often than not, women) of feral cat rescue and mainly the ones who are at the end of the supply line picking up the pieces and bringing cats to rescue centers. The women and men who are at the front line often working on their own against considerable odds and sometimes a bit of hostility from less sensitive people. Who are these people? Shouldn’t they be really recognised? Without them cat rescue wouldn’t work. They are volunteers working to help cats for altruistic purposes. Of course, they get pleasure from working in cat rescue but the objective is to help cats. It is a giving profession and in lieu of financial reward it would be nice if some of these people got a mention.

In general, there are too many awards dished out for political purposes. That said, thankfully in the UK, I have managed to find one New Years honours award (awards that recognise merit in terms of achievement and service) given for “services to animal welfare”. Sheila Parsonson was awarded the MBE (Member in The Most Excellent Order of the British Empire). Sheila founded the Colchester Cat Rescue and is a Trustee (at Jan 2010). But this is an exception, it seems, that supports my argument. One woman who will no doubt be given an award in due course (unless her efforts to save feral cats from the Olympic site has upset the establishment) is Celia Hammond of

Some of the regular visitors to this site immediately come to mind as deserving of an award – the PoC Gold Award! Jan has written passionately and with humour about her one women feral cat rescue operation (I am correct in saying it is one women, aren’t I). She has recently (at 5th Jan 2010) re-homed some of her “wild bunch” at a farm. Relocation can be tricky but if done well this is surely the best solution (Put Feral Cats to Use). Then there are Ruth and Barbara who spend time at Kays Hill Animal Sanctuary and who defend the rights of cats with passion (please see, We Built a Cat Run). Joyce has rescued feral cats for years it seems (please see Furby thinks his is a Turkish Angora Cat as one of her pages). I am sure that I have missed someone.

But I would like anyone who visits this page to tell us, in a comment at the base of this posting, who you might nominate for a feral cat rescue award. I am thinking of the invisible and unknown person who is working away almost unseen. One person who was that (almost) but who became well known for her feral cat rescue work was Katherine Varjian of Beverely Hills. Her work led to a change in the municipal code of Beverly Hills. A new ordinance was passed to specifically deal with feral cats. Realistically, I don’t expect much of a reaction to this post but one or two names might pop up in due course or over time. And at the end of the day, I would like this website to reward them through a financial contribution to their cause.