In truth this is a non-news story because it is stating the obvious. There is nothing special about the flesh of a dead human over that of animals because we are animals anatomically speaking.

Cats will eat human flesh when needs must. Image: iStockphoto.

Metro.co.uk reports that researchers at the Colorado Mesa University’s Forensic Investigation Research Station put the bodies of 40 deceased individuals outside surrounded by a 10 foot high fence topped with barbed wire. The fence went underground to a depth of two feet.

In the interests of educating police, coroners and medical examiners, they were looking into what happens both naturally and unnaturally to a dead human body while it decomposes.

Security cameras picked up feral cats entering the compound and eating some of the bodies. It is reported that they preferred arms. And one cat returned 35 days on the trot to eat the same body.

This cat was a tabby and presumed to be feral. He or she ate the corpse of a 79-year-old woman. He ate the soft tissue of the left and arm and chest, mainly skin and fat. Perhaps the reason why this cat showed no interest in the other bodies is because she had confirmed that the chosen body was safe to eat. There was no need to take an another test on another body and risk being poisoned (my thought).

A black cat visited the body of a man who died at the age of 70. This cat ate some of the man’s left shoulder and abdomen. He returned 10-16 times to the same man and did not eat any other corpse.

Cats focus on the soft tissue such as lips and nose or hands and feet and they targeting previously penetrated areas (probably for ease of access).

They also scavenged on bodies in the early stages of decomposition and stopped at the onset of ‘moist decomposition’.

They had got in via gaps in or under the front gate.

Comment: What does it tell us? Nothing new to be frank. Cats are very good at getting into places. We know that because they are amazingly athletic particularly when attracted to the smell of dead flesh.

We know that domestic and feral cats are obligate carnivores (they must eat the flesh of animals) and that humans are made of the kind of stuff that cats find attractive to eat; flesh i.e. muscles, skin, fat, and bone, nerves etc. with added water. Seventy-percent or more of the human is water.

One of the authors of the study admitted that there is nothing unusual or odd about the cats’ behaviour. Neither is there anything macabre about it. It is all normal except perhaps leaving 40 dead human bodies outside in a compound for medial research. That’s a bit macabre and liable to attract predator animals and insects etc..

There are many stories on the internet of cats eating dead cats in homes where there is cat hoarding and gross neglect. This is the same thing. Humans eating humans is the same thing too. When push comes to shove humans will eat humans. The drive to survive is that strong and there is nothing unusual about it.

SOME MORE ON OBLIGATE CARNIVORES:

We hear a lot about the cat being a 'strict carnivore' (obligate carnivore) but what does it mean in practical ...
Read More
Can cats eat pork? Is pork safe for cats?

Yes, of course cooked pork is safe for domestic cats to eat because it is the flesh of a pig ...
Read More
Can dogs eat cat food?

No! The answer is in the evolution of cats and dogs and the divergence of their "evolutionary paths" some 30 ...
Read More
Can a vegan diet for a cat be acceptable?

I'm going to play devil's advocate and write something provocative. Can a vegan (or vegetarian) diet for a cat be ...
Read More
What if cats were herbivores

Wouldn't the world be better if all creatures were herbivores? Herbivores eat plants to live. There would be no killing ...
Read More
Dogs Eating Cat Food 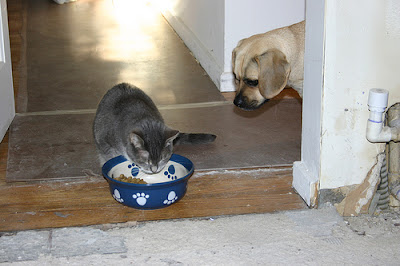 People question whether dogs eating cat food is OK - for the dog! The cat will be a bit miffed ...
Read More
Please comment here using either Facebook or WordPress (when available).