This is a powerful story of an attempted cat rescue that sadly failed but which succeeded in leaving a legacy: pet oxygen masks donated to the Fresno firefighters by a generous person after reading the story.

Back in June 2013, a kitten lost it’s life to a fire, despite the desperate attempts by Fresno, California firefighter Cory Kalanick and his fellow firefighters to save it. The video taken by Cory’s helmet camera on June 8 to show his kids how he did his job has resulted in a major donation to the Fresno fire department.

Here are stills from the video, which you can see below. I am sorry they are a bit disturbing. 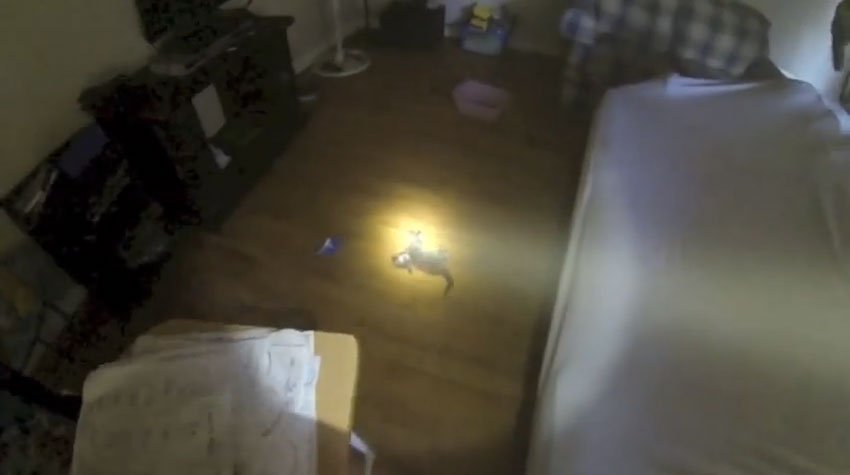 The video shows Cory as he finds the kitten in a smoke filled room and then administers oxygen outside the home after responding to a residential cooking fire call. The rescue caught on webcam soon went viral, and has now resulted in both an equipment donation and a monetary donation by a volunteer with the departments Community Emergency Response Team.

Cory says he’s still getting calls after the video showing him trying to revive a kitten using a pet oxygen mask. Unfortunately the kitten died during the night due to smoke damage to its small lungs. At the time of the fire the Fresno fire department only had two small pet masks. Thanks to a local cat lover, animals in the Fresno area now have a greater chance of surviving a fire.

Susan Disney, who volunteers with the emergency response team, saw the video and was moved by the effort put into trying to save the small kitten. Susan told reporters that if she had a fire in her home, she’d want firefighters to be equipped to save her cat. The story moved her so much that she donated 42 pet oxygen masks to the city, along with a cash donation to an animal hospital. The pet oxygen masks, purchased through the Emma Zen Foundation, cost more than $3,000 and come in three sizes. Now each of the fire departments 24 stations will have the masks on their trucks.

Cory has gotten an amazing response from the video as far away as Germany and Russia. A few people sent him care packages at the headquarters where he works. Cory also made $900 from the video and is donating that money to an animal hospital.

Pet sized oxygen masks are becoming a must-have for many fire departments. More and more families now consider their cats and dogs as family, and firefighters now realize just how important pets have become. Many families consider their dogs and cats as their children. To not offer life saving equipment geared toward pets would be tragic.

While the kitten Cory saved didn’t survive, many victims of fire, including their pets, owe their lives to the bravery and compassion shown by these firefighters.