The first thing that catches one's attention is that the Ankara Zoo Turkish Angoras do not look very much like the contemporary Turkish Angoras and not even like the older variety of the Western cat fancy.

What could be the explanation?

The complete prohibition on the export of TAs from Turkey and even DNA samples, would have obliged breeders to breed time and time again from a very small genetic pool leading to serious inbreeding. 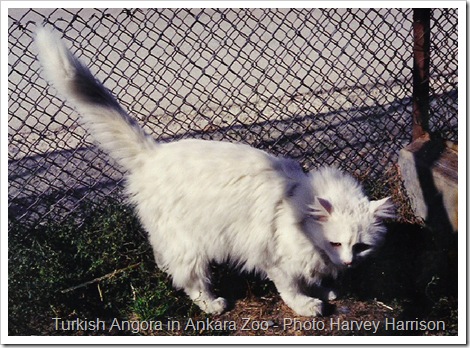 Another larger format version to show the cat clearly

Instead of that I suggest that outcrossing to other breeds was undertaken with the resultant change in appearance and DNA marker.

Nevertheless, the findings of the UC Davis Genome Project determined that the contemporary Turkish Angora (TA) is more closely related to the Egyptian Mau and to Tunisian cats than to cats with Turkish DNA.

They only trace a distant relationship to the Turkish Van but with influences from Italy, Israel and Egypt.

There is nothing simple about the ancestry of the contemporary TA. The DNA markers of the Turkish Van and the Turkish Angora from the Ankara Zoo are virtually identical explaining their identical appearance.

I have sent further photos of Ankara Zoo Turkish Angoras which will no doubt be published shortly.