The fishing cat was considered by early taxonomists to look like the Indian civet, a cat-like creature. For this reason the scientists named this cat, Prionailurus viverrinus, after the viverrid family of which the civet is a part.

The photographs by these Flickr photographers, supplementing this written fishing cat description, show the powerful build of the fishing cat. The legs are relatively short compared to some other wild cats, particularly the serval. 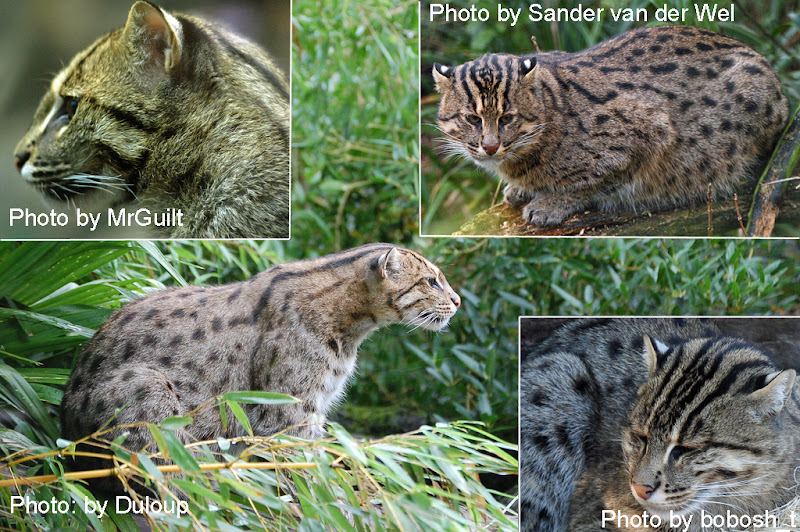 The toes of the forepaws are “partially webbed”. The claws slightly protrude from their sheaths even when retracted.

The tail is about one third of the head plus body length combined. It is apparently thick and muscular at its base (is it a kind of rudder when swimming?) and patterned with about five rings and a black tip. As expected, the fishing cat is a strong swimmer. Many wild cats are, including the tiger. The fur is coarse and short, olive brown or gray in color.

There are dark spots over the body and some are joined up to form lines. The face has the dramatically high contrast markings seen on the other cats mentioned above. There are the parallel lines on the cheeks sandwiching white fur and the five dark lines of varying regularity and thickness running over the forehead to the shoulders.

There is white around the eyes. These incidentally are called “spectacles” by breeders of purebred domestic cats. The undersides of the body are also white as are the whisker pads and to the left and right of the end of the nose.