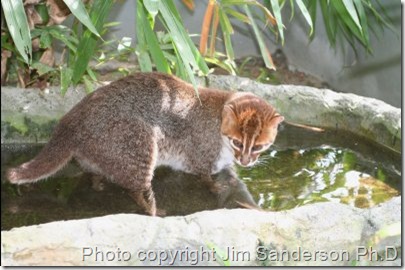 The flat-headed cat’s scientific name is Prionailurus planiceps, which is based on genetic testing. There are no subspecies.

It is related to the Asian leopard cat. However, it is said to resemble a mustelid1 as it has short legs and tail and very small ears on a long head. I think this is a slight exaggeration. This means that it does not look so much like a cat as the Asian leopard cat1. Mustelids are the weasel family.

As can be seen from the photograph, above, by Jim Sanderson PhD, this cat has an outstanding brown ticked

coat, with a wonderfully marked head of white stripes including what a cat breeder might term headlights (white around the eyes – see Toyger). The head is browner than the grey/brown body which has a lighter belly. As mentioned, the ears are relatively small (compared, for example, with the Serval, a cat that depends very much on hearing to locate small prey in the grass at some distance). The cat’s weight puts it at the lower end of the domestic cat weight range, being approximately between 3.5 to 5.5 lbs (1.5 to 2.5 kgs) (see Domestic Cat Size). The Sunquists in their book Wild Cats Of The World quote: 1.5 to 2.2 kgs. Head and body length has been measured to be from 446 mm to 521 mm1. This equates to a length of about 16-20 inches excluding a noticeably short tail of about 5 inches, which is clearly visible in the photograph.

The name indicates a flat head, which is not readily apparent from the picture but it does have a long slopping head down to the snout. The toes are webbed like those of the Fishing Cat. And the face resembles the larger fishing cat.

The claws do not fully retract as for the Fishing Cat, the Cheetah and Iriomote Cat

. However, for the sake of complete accuracy the claws of the flat-headed cat do retract but the sheaths that cover the claws are reduced in size leaving the claw exposed. The feet are long and narrow.

For the Cheetah this gives added purchase for speed. I think it reasonable to surmise that for cats that fish this has evolved to aid fishing by snagging fish with the claws (cats fish).

The flat-headed cat’s reddish-brown fur is soft and thick. Although the underbelly is mottled white. The individual hairs are tipped with white or grey. This appears to be a tabby cat coat.

This cat’s eyes are closer together and set further forward than other cats. This allows for better stereoscopic vision. This should result in better judgment of distance and aid hunting.

Unusually, all the teeth of this cat are pointed. This makes the teeth very efficient, when combined with strong biting power, at seizing and gripping prey that is slippery, namely fish, which are a large part of its diet. This cat is probably as good a fishing cat as the Asian fishing cat. See a large format version of the above picture and more. 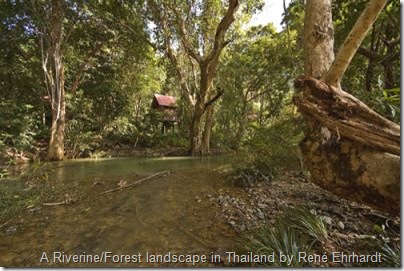 The wildcats with long tails such as the Clouded Leopard use their tails for balance when climbing trees so I would presume that this cat is not ideally built for tree climbing. This is supported by the little that is known about this cat, namely that the flat-headed cat’s habitat is wetlands, swamps and riverine forest where it lives off fish, frogs, shrimp (crustaceans), rodents, birds and villagers’ livestock (poultry). The flat-headed cat prefers to hunt in the water dragging prey out to the bank to prevent escape in the water4.

They have also said to inhabit oil palm plantations2. This is probably an adaptation to the loss of their natural habitat3.

Another Asian cat which lives in a similar habitat is the Asian Leopard Cat from which the domestic wildcat hybrid, the Bengal cat was created. The Bengal is well known to like water as does the Savannah cat, another wildcat hybrid (Serval/domestic).

Camera traps have photographed activity at night and dawn indicating a crepuscular nature (mainly active at twilight – dawn and dusk). Although there are reports that they are also nocturnal.

Kittens vocalise like the domestic cat and they do purr. Also like a domestic cat they kill mice etc. by the classic nape bite. As it lives in oil palm plantations it hunts rats that populate these plantations.

However, not a great deal is known about this species of cat, with few observations and camera trap photographs of the cat in the wild. The picture heading the page was taken, it seems, in a reserve or zoo.

This cat is found only in:

Its range overlaps with the Bornean Bay Cat (Indonesia). The map of the range below is based on the IUCN Red List of Threatened Species™ map. The map above is more recent and more detailed and shows how fragmented the distribution has become.

As stated above, sadly, little is known about the flat-headed cat. However, we do know where they live and we also know that the activities of people are disturbing these areas and thus this cat is classified as Endangered by the IUCN Red List of Threatened Species™ .

There is rapid deforestation on the island of Borneo, which also endangers the Bornean bay cat as well as this cat: 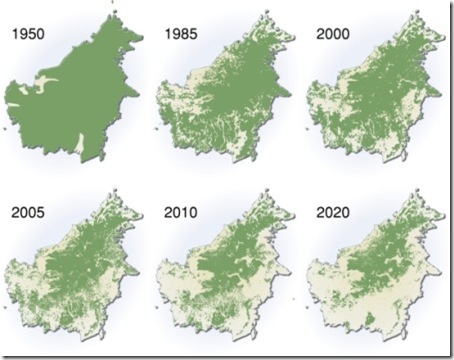 This map is from this webpage. Author credit is: Hugo Ahlenius, UNEP/GRID-Arendal. The source of the information for the creation of the map is: Radday, M, WWF Germany. 2007. ‘Borneo Maps’. January 24, 2007, personal e-mail (January 24, 2007). This map is also on the Bornean Cat page.

Specifically, causes of habitat destruction are:

All the threats are human generated.

As to conservation, one can only feel that despite the efforts of conservationists, the battle is being lost. The flat-headed cat is listed under Appendix I of CITES. Appendix I “lists species that are the most endangered among CITES-listed animals and plants” (src: CITES). See CITES in relation to cats.

Hunting and trade are prohibited in:

But is it being enforced? The enforcement of rules, that often are more like public relations exercises, is a perennial problem worldwide in relation to endangered species. On the ground, in Asia, there seems to be inadequate commitment to enforcing legislation. Surely this is a factor in assessing survivability but I don’t think it is one of the criteria used by IUCN Red List of Threatened Species™.

As to national parks, the Flat-headed Cat is found in the following:

What is needed to conserve this species:

2. Cat News referred to in Wild Cats Of The World.

4. Muul I and Lim BL Ecological and morphological observations of Felis planiceps

Photograph of riverine forest published under a Attribution-NonCommercial-NoDerivs creative commons License  — this site is for charitable purposes in funding cat rescue.