A stray cat on the beach at Brunei, a country located on the north coast of the island of Borneo - Photo by boxcam (Flickr)

If singing cats are a YouTube invention flying cats are a Flickr invention. You know the kind of picture, a cat flying through the air showing off its athleticism. Cats can look awesome when caught mid-flight during a spectacular jump. Here is a classic flying cat: 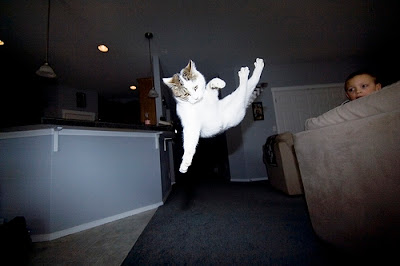 This post, though it not about the classic flying cats of Flickr. No, it is about something altogether more strange, so strange that I think it might be an April fools joke and if so lets enjoy it. If not lets be horrified! The story teller says that it is a true story but it is X rated so cats should avert their eyes when mama is reading this if they are on a lap.

Back in the good old days of the 1950s, when life was simple, a pesticide called DDT (dichlorodiphenyltrichloroethane) was widely used as a means of controlling malaria, a killer disease in poorer countries. Malaria was a big problem on Borneo, the world's third largest island, located to the north west of Australia. It was a densely forested island but sadly no longer due to logging causing the gradually extermination of the wildcats living in the forest.

I digress. The United Nations World Health Organization (WHO) decided to spray the island with DDT. The mosquito that carried the protozoan that caused malaria was killed with many other bugs and some of these bugs were useful. One useful bug was a wasp that laid its eggs in a caterpillar. This killed the caterpillar, which was useful as the caterpillar ate the thatched roofs of the houses. Once the wasp was killed the roofs fell in eaten as they were by the caterpillar.

Worse, much worse was to come. The DDT worked its way up the food chain, from bugs to lizards to cats. And the cats died.

In poor countries cats are very useful semi-domestic companion animals. Think back to the reason why they were domesticated in the first place by the ancient Egyptians (to kill rodents and snakes). Without cats the rat population on Borneo thrived and with a thriving rat population came disease, the bubonic plague.

WHO had substituted the bubonic plague for malaria. But only for a while as the mosquitoes rapidly became resistant to DDT so they had both diseases. Bubonic plague is the same disease that killed 20% (100,000) of London's population in the great plague of 1665-1666.

The only answer was to re-introduce feral cats to Borneo. And to do this, across a wide area, and with expediency, it was decided to fly them in on cargo plans and parachute them down to the jungle below!

Cats were apparently rounded up from nearby countries put on an aircraft and pushed out over the island. I wonder what kind of parachute was used? I don't wonder, though, about how many cats were injured and killed. It must have been a significant number. And how did the cat release itself from the parachute. Nah....this must be a April fools joke, surely?

The moral is that we, people, cannot play around with nature without consequences that are sometimes, indeed frequently unforeseen. But we do it all the time. If you play with nature you build distortions into how it works.

Declawing cats is playing around with nature too. And I say the consequences of declawing cats is the opposite to what veterinarians say it is. They say it saves cats. I say it kills cats because it creates an underlying attitude towards cats that is distorted and incorrect and which indoctrinates people into thinking that they can do as they please with them - a careless approach that leads to more abandonments and deaths.

We should respect nature and cats and that means all of the cat.

So, flying cats in this story is exactly what it says and if it is true it is a good example of the folly of humankind.

From Flying cats to PoC Forum