This is just an instinctive thought about the domestication of the cat in 2017. 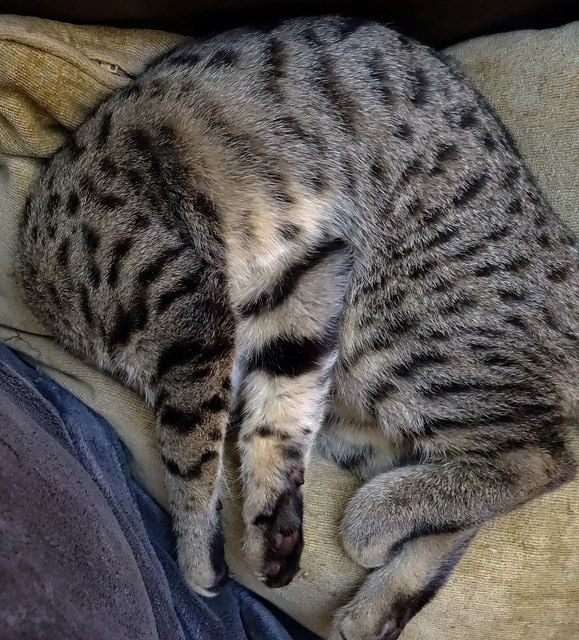 The amount of time that your cat sleeps depends upon how bored or unchalleneged he/she is. People criticise domestic cats for sleeping too much but domestic cats only sleep for extended periods because they have nothing to do. To kill time they snooze. It is a survival strategy. It stops the cat becoming distressed and stressed.

It doesn’t have to be like this but domestication, 2017, is like this in reality. It does not really work as it is meant to. We have moved too far from the original concept of wild cat domestication for it to be satisfactory for the cat. The original concept was that cats worked as mousers and lived outside the home on farms. Urbanisation and modernisation has made the domestic cat’s habitat sterile and unchallenging.

Since I built a cat containment fence around my back garden my cat sleeps more. He’s put on weight. He spends more time with me which is great but he is less active. He is more bored. I am challenged to keep him entertained.

Cats have a limited amount of versatility. In fact they are very unversatile. If only they could read! Or watch television. They are motivated to hunt and almost everything they do revolves around this single activity. If there is nothing to hunt a cat will sleep. Of course a cat owner can play with their cat but they won’t play for long and playing is a form of hunting for a cat.

I really don’t think that cat owners can fully accommodate a domestic cat’s desires without allowing him to free roam and be challenged, which sounds awful. It is something that many people don’t want to see. And it is dangerous for the cat. But the domestic cat needs to be challenged. It is impossible to fully challenge a cat if he/she is living in a contained area unless that area is sufficiently large to allow wildlife to enter into it to stimulate the domestic cat’s hunting instincts.

In many cases we have a situation which is inherently deficient from the cat’s perspective. That sounds negative but I’d prefer to call it realistic. Feel free to disagree. I am open to a counter argument.