Hi Everybody! It's Furby again. I really don't have much time to write this but I'm doing it as a special favor to mama and Michael. Today is my best day EVER! I know I say that a lot but it's true. Today I got my first TOY! Mama says it's a Turbo Scratcher and she'll tell you how to get one later. All I know is it's fun and I'm dizzy. I've been playing by myself with it all afternoon. Now Lola is awake from her nap and she's playing with me on it. 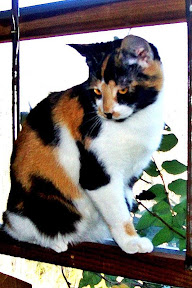 This toy is driving me crazy! There's a ball that goes around and around in a circle and I can't catch it. Every time I paw it the ball goes in the other direction. At first I tried staying outside the circle pawing at the ball and that didn't work. Then I decided to sit on this scratchy thingy in the middle (Lola used it to do a quick manicure) and tried to catch the ball from there. Still no luck. I've even attacked it from the other side of the room and as soon as I paw the ball it starts going in circles AGAIN!

Is mama trying to mess with my head? She keeps watching me play and laughing at me. I want to get the ball out so I can carry it around like my dog buddy Cody does with her toy. Does anyone out there know how to get the ball out of the circle? Oh well, I guess I'll just keep chasing it until I figure something out. This could take awhile. Lola isn't being any help. We've even tried double-teaming it. Lola is the smartest cat I know and even she can't figure it out. 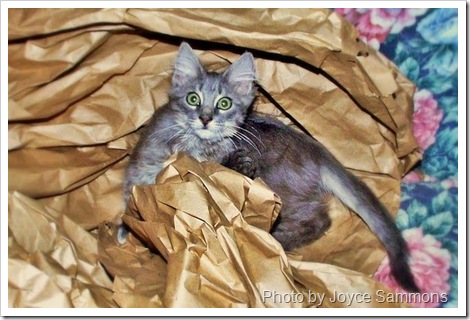 This is me playing in the packing paper as well..!
Photo by Joyce Sammons

If it's all right with everybody I'm gonna let mama finish the story. I have a ball to chase. Here I am:

Bergan Turbo Scratcher is the name of the toy I bought for Furby. I owned one many years ago and the cats loved it. There was always one cat or another playing with it. The cats would even gather at different points surrounding it and several played at the same time. It also has a replaceable center pad to use as a scratching post. The design is simple. I wish I had been the one to invent it. There is a circular track with a ball that cannot be knocked off the track. Cats use their paws and try their best to get the ball out.

There is also a replaceable scratching pad in the center. The cat can sit on it and chase the ball or they can use it as a scratching post. It comes with a pack of catnip to sprinkle on the pad.

I remember when this product first came out. I was working in a retail store that sold it and there was a video playing over the display. The video showed a litter of kittens all playing with it at one time and having a ball.

This is one toy that is worth it's weight in gold. It sells for $15 on average and can be ordered online. I'm not sure but the larger pet store chains probably have it in stock. Cat's simply don't tire of it. I've had it out for almost 4 hours and Furby's only been off of it maybe 20 minutes. I get the feeling I'll hear that ball going around during the night.

There are several videos on YouTube showing cats with this toy. On a scale from 1-10 I give this toy a 12.