Genetic DNA testing appears to have found a valuable use in the world of cats. There are almost endless possibilities. In this post I’d like to refer to two; one concerns a wildcat and the other domestic cats. I would expect many visitors to be interested in the domestic cat application because they are interested to know if their cat is a member of a cat breed. Although I have doubts about the test.

Find out the breed of your cat!

The idea here is to take a cheek swab with a cotton bud from your cat and send it to the Feline Genetics Laboratory at the University of California managed by Leslie Lyons PhD and the laboratory will run a genetic DNA test to ascertain if your cat is a purebred cat – a member of a cat breed. In British pounds I am told the cost is a modest £76. But please check. And please check with the lab first! That is it, in a nutshell. Of course, that is an oversimplification. The lab will also be able to tell if your cat is a purebred mix (half purebred or partially purebred). Although, personally, I can’t see a reason for knowing that because a part purebred cat is a moggie just the same. And let’s remind ourselves that moggies are as good as, if not better than, purebred cats. 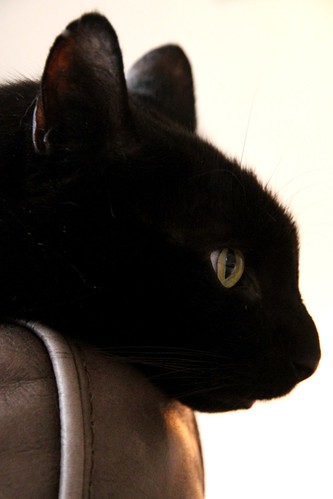 My cat “Charlie”. He has some Siamese in him. He has a long face and a loud voice!

The laboratory can only test for 29 cat breeds. There are actually over 100, of which about 70 are mainstream breeds, so this test is limited in that respect. As the genetic markers come from USA bred cats (CFA and TICA registered) the test is also limited to USA cat breeds, which although common to other countries will be different genetically. I also sense that it might be limited in other ways. I will explain that.

You have to look at domestic cat history to understand how this gene test works. All domestic cats originate from an area in and around ancient Egypt; the Middle East and its environs. From there the first domestic cats were transported by traders and travellers (and Romans) to other parts of the world. In far flung places the domestic cat bred naturally and cats in different regions developed their own genotype (genetic makeup), which is identifiable. Of course, before people started breeding cats all these cats were random bred cats (moggies) but they had a genetic profile nonetheless that was linked to the region where they were found.

It is this geographic genetic profile that the gene test refers to. That by itself is not enough. It does not tell you a lot to be honest. I don’t think that part of the test will interest many people. However the gene test is refined to compare the genes of your cat with 29 cat breeds to see it your cat has some of those precious cat breed genes in her.

For me this is where things get muddy and unclear. Let’s take one example, the Siamese cat. The original Siamese cat was found in Thailand. That original cat, from thousands of years ago, had a genetic profile of sorts. But, after importing it to the West about 130 years ago there has been extensive selective breeding on this cat, which has produced a cat in the West (i.e. America and Europe) that has little or no resemblance at a genetic level to the original cat in Thailand. There is no longer a connection. If I am correct you cannot therefore link geographic genetic profile with the profile of a purebred cat from America. They are two different cats that look similar but are different in many ways. For the Siamese cat the genes that produce the pointed coat will be the same but not much else I suspect.

There is another complication. If your cat was found to have a genetic makeup similar to or even the same as the cats of a cat breed it would not make your cat a purebred cat of that breed because the cat associations would not accept that cat as part of a breed; unless they are working with the laboratory which is unlikely. For a cat to be formally recognised in America as a breed of cat it has to accepted by a cat association. That does not apply in many other countries, incidentally.

The example I gave was the Siamese. Another is the Persian. I believe it is well known that the modern Persian bred by breeders in the West is completely different to the original Persian cat, which was possibly a Turkish Angora (TA) (see Persian cat history). And the true Turkish Angora is a random bred cat in Turkey that probably has a completely different profile to the TA bred cats in America. You see, cat genetics are a bit messy.

So, what can this test achieve? Where the genetic situation is as muddled as it is due to selective breeding for appearance and not to maintain the original genetic profile it is hard to see how this test can tell you anything worthwhile. A final note: the Chartreux, one of the grey cat breeds, is famous for being the only cat breed that is bred with an eye to maintaining the original cat. The objective is not to ‘refine’ the cat but to keep it original. Does this make the genes in this cat the same as the original from hundreds of years ago? I don’t know.

The biggest threat to the Scottish Wildcat, the only wild cat species in the UK (at 2012), is hybridisation. Because the wildcat and the domestic cat are very similar they interbreed naturally. A stray moggie meets up with a purebred Scottish Wildcat that has come down from the mountains to rummage around the carbage of some estate. They produce offspring that look similar to a genuine, purebred wildcat but they are actually first filial (F1) wildcat hybrids. If this process goes on for a long time, eventually you have no purebred Scottish Wildcats left. Technically, that might already by the case. The interesting aspect of this is that the experts don’t know for certain how many pure Scottish Wildcats there are left. They estimate 400. That figure has been mentioned for a long time. The gene test will identify the pure-bred cats, which can then be protected.

The Scottish Wildcat retreated to the Scottish Highlands mid way through the 19th century about 160 years ago. The species was exterminated from England by hunting. Its fur was used for clothing including nuns habits. It is possible that the last one was shot in 1853 by Lord Ravensworth at Eslington, Northumberland, England. Accordingly this precious wildcat has had 160 years to cross-breed with domestic cats. It will be interesting to see if the figure of 400 wildcats left in the wild will have to be downgraded. I suspect that it will.

Another interesting aspect to this story is that at the first cat show in 1871, at Crystal Palace, London, England, a Scottish Wildcat was exhibited by the Duke of Sutherland. The cat had to be kept in a strong cage and it was impossible to handle it. It had been hurt by the trap that caught it. This sounds a horrible story.