People want to see giant Maine Coon pictures because people like large domestic cats. Perhaps we like all things large or small. The Maine Coon is the largest cat breed other than wildcat hybrids. But this doesn’t mean that individual random bred cats can’t be larger, some of them are and some Maine Coons are fairly average in size. However, of all the domestic cats you’ll see more giants amongst the Maine Coon (MC) population than any other group of cats. This is probably because over 150 years of selective breeding the breeders have gone for large cats because the consumer likes them.

The cat associations don’t actually specify that this cat breed needs to be big to be in compliant with the breed standard. It is cat breeders who have gradually made them bigger through selective breeding. In fact, the CFA breed standard says the following about this breed: “BODY SHAPE: muscular, broad-chested. Size medium to large”. Interesting that, don’t you think? The MC should be medium-to-large in size. It doesn’t say that they should be super-sized! 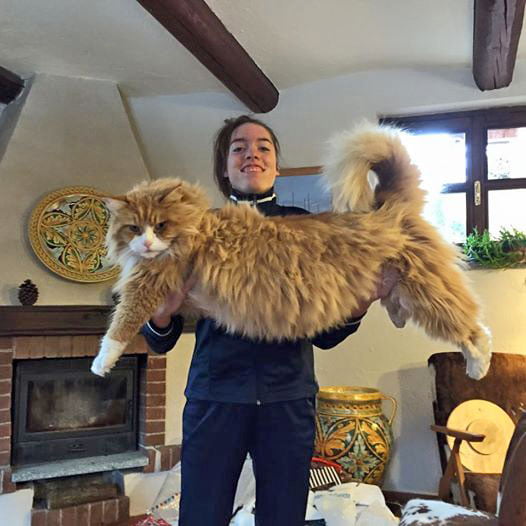 For me the most noticeable feature of these large domestic cats is the size of their heads. Although obviously smaller than the human head the difference in size is much less marked than usual. These really are big domestic cats. Although please note that in the last photograph (the one immediately above) the reason why the grey or silver tabby and white MC has a head which is the same size as his human companion is because the cat is nearer the camera.