The now famous Tiger Temple is a Theravada Buddhist temple in western Thailand. It was founded in 1994. A tourist site states that there are 167 tigers there. It is run by buddhist monks. It looks totally kosher. Monks and tigers make a nice combination. It can only be a good thing, it appears. It is a picture perfect mix of devoted religious ethics and cuddly wild tigers where you can get that all important tiger selfie, which nowadays are so popular with tourists.

The monks say they are involved in that all important public relations mascot: conservation! They are not. The tigers are beautifully cooperative and almost 100% safe. They are like big cuddly pets, just the way tourists like them. How do they manage that?

Well, after the truth about the place has been revealed worldwide, the Thai government plans to seize all the tigers from this cruel place. Let’s see it if happens. 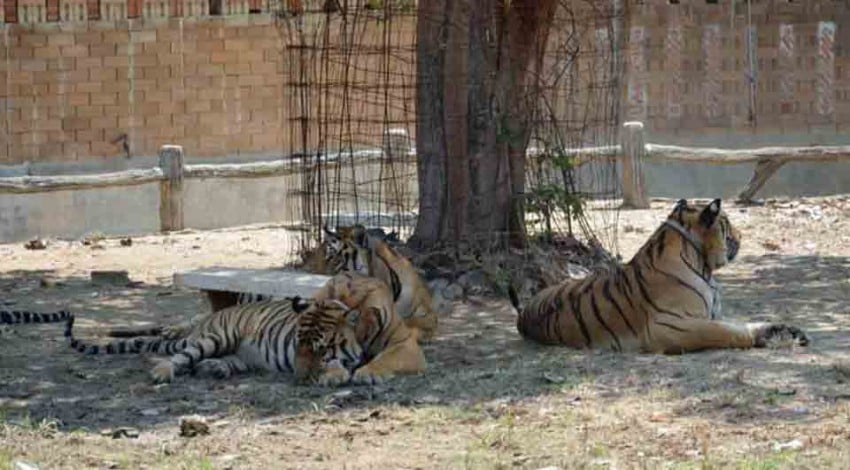 How is it so cruel? It is cruel in a myriad of way. It is hard to know where to start but I’ll touch on some points here. Firstly, the Tiger Temple is not involved in conservation – more like the opposite: exploitation. The monks of the Tiger Temple say they rescue tigers from poachers. It appears they do not. They trade internationally in tigers under the radar to avoid being caught as these are criminal acts even under Thai law, which unsurprisingly is poorly enforced I regret to say makes it almost useless.

There is evidence that the Tiger Temple did a deal with a tiger farm in Laos in which older tigers at the temple were traded for cubs with the same names to avoid detection. They have illegally kept species of animals other than tigers such as bears and jackals.

They illegally breed tigers and abuse them as cubs. They take them away from their mothers at three weeks of age so the cubs are completely dominated and indoctrinated by humans where they learn to be obedient and passive via abuse such as this video demonstrates:

They illegally breed tigers because they require a license to breed under the Thai Wild Animals Reservation and Protection Act of 1992 and they don’t have one. Most of the tigers at the temple are of unknown origin which automatically means they are not conservationists because there is an obligation to know the genetic status of all tigers in captivity if you claim to be involved in conservation. There is ‘genetic pollution‘ of tigers.

The tigers become utterly broken – perfect for the high revenue, $180-at-a-time tiger selfie which the monks say is necessary to keep the place going. If tourists from the West want to close the place down (perhaps no longer necessary but wait and see) they should stop paying for tiger selfies. Give the place a miss. Don’t be deceived by the fake warm glow of monks with pet tigers.

The Tiger Temple falls short in standards such as cages that are too small and without any attempt to enrich their environment. At any one time 10 tigers are entertaining visitors. The rest spend 20-21 hours daily on concrete floors in small cages. Reports indicate that some end up becoming mentally ill  – pacing, chewing on their paws et cetera.

It appears that even in full view of some tourists tigers can be abused by, for example, hitting them with thin canes and pulling their tails.

The Tiger Temple is yet one more example of the mass exploitation of the tiger. If the tiger is not being exploited via abuse it is being poached and eaten. It is extremely sad.

All tourists should avoid this place.

Source: Government Plans to Seize All Tigers From Thailand’s…..