Guide Cats For The Blind

It is a fund raising program brought about by the collaboration between a talented poet, Les Barker and a charity organisation, "British Computer Association of the Blind" (BCAB).

Les Barker comes from Manchester, England and trained as an 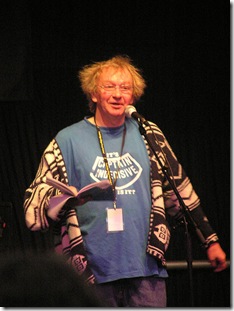 accountant but found his vocation in poetry. He is an English poet. Below, right is a photograph of him reciting one of his poems on stage.

I have watched a video of him (see below) and I think it fair to say that he is an archetypal Brit!

And good for him. He writes comic poetry and parodies popular songs. His work though is thought provoking.

Les is an international performer having performed in Hong Kong, Australia, New Zealand, the United States of America and Canada.

He has published 76 books to date and has released (either as a solo performer or with his band) 20 albums. His books typically feature a mixture of monologues and comic songs, with a few serious songs.

Here is a video:

Mr Barker wrote a poem called “Guide Cats for the Blind”. It is available (at May 2010) on CD and contains the songs and poems of Les and features Terry Wogan, Mark and Lard, Ned Sherrin, Sir Jimmy Young, Charlotte Green, Jonny Walker and many more, all well know British people.

The CD is available from the BCAB shop1 – this is the link. Or you can buy from Amazon: link.

The purpose of this organisation is to support computer users who are partially sighted or blind. It was established in 1969 and it is run by volunteers. Click the link for more About BCAB.

Their EyeT4All Project provides a relaxed way to introduce information technology (IT) to blind and partially sighted people.

Clive Lever, a musician and songwriter involved with  BACB heard Les’s poem “Guide Cats for the Blind” and approached Les to use the poem in a title track of a fundraising CD. Les agreed. In fact a series of albums were recorded and a healthy £40,000 and £50,000 has been raised.

I am unable to publish the poem here for copyright reasons. You gotta buy the CD!

Link: Facebook Guide Cats for the Blind – the series

From Guide Cats For The Blind to Cat News