↓
Home→Cat Behavior→play→Has your cat ever hidden his toys so well that you can never find them?

My cat has done this. He has several toys and he has taken them away and hidden them somewhere. Despite a lot of searching I can’t find them. I don’t believe they are in the apartment any more. My current belief is that he has thrown them away not by intention but by accident because I believe he has put them in the rubbish bag, which I have thrown out. 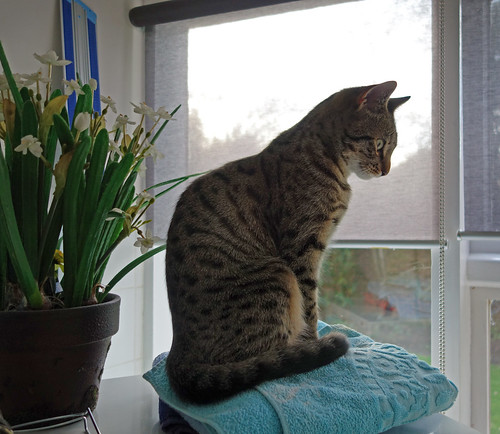 I don’t actually have a rubbish bin. I use a big black bag to put rubbish in which is in the kitchen. He has access, therefore, to it. This is the only solution I have because I’ve been through the apartment with a fine tooth comb.

Not only has he apparently thrown away quite a few cat toys, he has also thrown away a little plush toy that my girlfriend bought me. It is a snow leopard and was part of a fund-raising exercise which she bought me as a Christmas present. That disappeared soon after I placed it on my desk. It was quite a reasonable size and appears to have been hauled away as prey and hidden in the big black plastic waste bag.

Has your cat hidden objects so thoroughly that he never found them again? I am going to buy some more toys and I’m going to buy a bin with a lid on to put the waste bag in. In this way, if I’m correct, my cat will no longer be able to inadvertently throwaway the cat toys that I buy for him.

We know what he’s doing. He’s treating the toys as prey and taking them back to his den. He is hiding them so that he can feed on them another day. Or perhaps he is much smarter than that? Perhaps he’s throwing them away because he’s bored with them! Wouldn’t it be funny if he was doing that? That is a bit of fun but I am astonished I can’t find them.