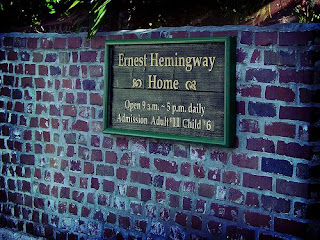 There is a mass evacuation of parts of Florida by people before Hurricane Irma strikes the state. Irma is said to be so fierce that it could cause deaths and there is predicted to be a considerable amount destruction of property. That, at least, is the dire prediction, so I was surprised to read that the fifty-four cats at Ernest Hemingway’s former home in Key West will be free to roam during the storm.

But when I read the article on chron.com I realised that the volunteers who work there are highly organised. They have been through hurricanes before and never lost one of their cats.

The Executive Director, Dave Gonzales, said that the fifty-four cats will be cared for by ten volunteer staff who are staying behind to weather the storm with the cats. The cats will have access to shelters within the complex.

“They know before humans do when it’s time to get in.”

Each of the buildings at the Hemingway home complex has entrances for the cats and I believe inside those buildings there are places where the cats can shelter. The buildings are robust it appears. The main house, built in 1851, has 18 inch thick limestone walls which are able to withstand heavy storms. The houses 16 feet above sea level so it is also protected against flooding.

Update 11th Sept: All the cats are safe and sound after the hurricane. Success.

Hemingway cats are world-famous. The cats currently at the property are thought to have descended from the original cats belonging to Hemingway. They are polydactyl cats meaning that they have more than the usual number of toes.

About half the cats are described as ‘American Polydactyl Cats’ which gives the impression that they are a breed of cat but they are not. It is thought that the reason why they are polydactyl is because they originate in a ship’s cat. Hemingway was given a polydactyl cat, presumably unsterilized. Ship’s cats were often polydactyl because it was believed at the time that the extra toes allowed the cat to keep his/her balance while at sea.