Here is a potted history of the big cats by a student of the wild cats – me. It is not meant to be overly heavy. The big cats are grouped together because they can all roar. The Puma (not one of the big cats) is bigger than the leopard but cannot roar (see Wild Cats Species by Size). It is a big little cat!

I think that the history of the wildcats and particularly the big wild cats namely the lion, tiger, leopard and jaguar is especially significant today as it puts into context their relatively rapid demise and their endangered lives because of human activity. I think that a lot of people look at the big cats as zoo animals; interesting to look at but best kept in a cage. And if that is the case it is because most of them are zoo animals! Well, in the case of the tiger that is certainly true. 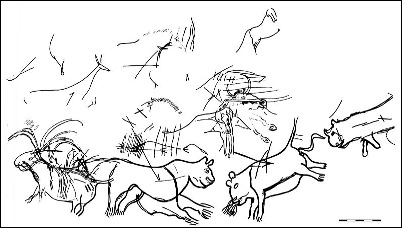 Once upon a time the big cats wandered freely throughout extremely large areas of the world. One of the interesting things for me is how the history of the big cats overlaps with our history. And in talking about our evolution I am getting into slightly dangerous water as quite a large number of people do not believe in evolution but that we were created by God in one go. Nonetheless, I will press on.

History of the Big Cats — The Jaguar

2.5 million year old fossils of the jaguar, a cat that now only occupies South America, have been unearthed (Ma is the term used to say “million years”). 2.5 Ma ago the jaguar roamed north in the Americas as far as Nebraska and Washington. The cat was larger than the current wildcat and it is thought that it had longer limbs. At that time it mainly occupied areas of North America where there were less lions; areas such as Florida, Texas and Tennessee.

Over these periods earlier versions of homo sapiens existed. But people of our current species homo sapiens did not exist at these times or at least this is the “dominant” view. So, for example, in Europe there was Homo erectus. It would seem that early humans came into contact with early big cats. But the impact of “people” on the big cats was infinitesimal compared to the present.

History of the Big Cats — The Lion

The current lion range (distribution) is a very fragmented one in Africa and there is a tiny population in north west India. However, some 2.5 Ma ago the lion ranged across Eurasia (Europe and Asia combined) and the Americas (north and south America). It ranged as far south in the Americas as Peru.

The earliest recorded lion fossil came from Tanzania, Africa and is dated from 3.5 Ma ago (source: The Big Cats and their fossil relatives by Turner and Anton). There are no fossil records before that date, apparently. However, the Wikipedia authors say that:

This is conflicting information, it seems.

In Europe (Italy) fossils of the lion were found to be 0.7 Ma old. This cat has been given the scientific name: Panthera leo fossilis. At this time in Europe Homo cepranensis, another forerunner of Homo sapiens, was around so they no doubt were aware of each other. Fossils of the lion have also been found in Germany and Poland. This lion was known as the “Early Middle Pleistocene European cave lion” (see picture above).

The Sunquists in their book, Wild Cats Of The World, say that the earliest “true lions” occupied Europe about 600,000 years ago (0.6 Ma). This concurs with the Wikipedia authors. So the earlier lions that I have mentioned above were lions, yes, but a slightly different animal.

The lions of Europe from 0.6 Ma ago were thought to be the world’s largest cats being 25% larger than the largest of the current lions. They migrated to China and fossils have been found their. Lion bones have been found in caves occupied by early humans. 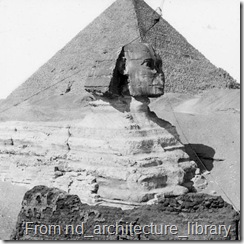 In North America and Europe the lion died out about 11,500 years ago (due to glaciation – ice age). About 5,000 years ago the lion was a major influence of the art of the Egyptians. For example, the Great Sphinx guarding the Pyramids is part lion and part human (lion body, human head). It was built in approximately 2500 B.C making it 4,509 years old at 2009. To put things into context it is thought that modern man, Homo sapiens emerged about 50-100,000 years ago.

The lion may have occupied Sri Lanka (formerly Ceylon) and it may have arrived there when Sri Lanka was not an island. In fact there was a natural causeway (land bridge) between Sri Lanka and mainland India that no longer exists. It bridges the gulf of Mannar.

Of course, we are aware that the bible contains many references to the lion and the lion was common in Palestine at that time. And we also familiar with the way Romans (2,200 years ago) kept lions as pets and for public spectacles. Perhaps the were the first people to dare I say it abuse this fabulous animal. 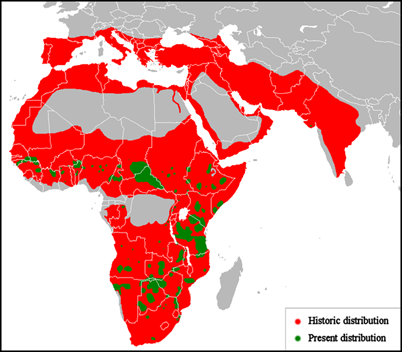 The map above shows the decimated range of the lion. Reproduced under a Wikimedia commons license. Tommyknocker (author). Note range maps are notoriously lacking in complete accuracy.

History of the Big Cats — The Tiger

The fossil history of the tiger goes back approximately 1.5 Ma. Update: they have dated an earlier tiger fossil to over 2 million years old. Read about it here. The distribution at that time was essentially similar to today but was much wider stretching; from the Caspian Sea in the west to Siberia in the east. Today its range is much reduced and fragmented because of human activity. The tiger was also found in Alaska (as was the lion) some 100,000 years ago. In Roman times the tiger was made to fight the lion. My research indicates that the tiger usually won (see Lion vs Tiger).

It is thought that all tigers come from Siberia (src: Robert M Johnson – Institute of Greatly Endangered and Rare Species). Tigers migrated south during the last ice age i t is believed. They migrated to Bali in the south and the Caspian Sea in the west. The appearance of the tiger changed in the process as a result of the new environments. For example, the Balinese tiger (now extinct) was small at about 200 lbs. Tiger also underwent colour changes. One minor point, the well known large cat called the Saber tooth tiger was not a tiger and is not of the same species (see Saber tooth tiger). 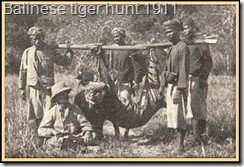 The great sadness about the tiger, the world’s favourite animal, is that it has been both globally admired and persecuted throughout its long association with humankind. It is a peculiar dichotomy.

You would have thought that we would cherish and protect that which we admire but no, we prefer to shoot it, eat it and wear it.

History of the Big Cats — The Leopard

The leopard, some 2.5 Ma, was present in Europe but not in North America. It is the most widely distributed of the big cats today.

The first fossil record is from Tanzania and the first European “appearance” is in the south of France at about 0.9 Ma.

The underlying history of the big cats is one of reduction in distribution as the human population exploded leading to a mirror reduction in the population of the cats. We tend to push other creatures out.

From History of Big Cats to Wild Cat Species

History of the big cats – sources: