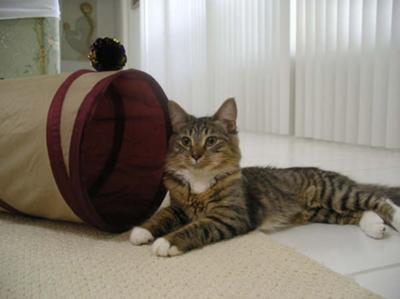 I am not sure exactly when she was born because I got her from a local shelter. On her first visit to the vet back in March, he said she was around 6 months old. She was brought to the shelter because her owner had too many cats and could not keep her. (so sad) She had been there about two weeks when I spotted her.

She only weighed about 5.9 lbs. when I got her but she looked bigger because she is a medium haired cat with a big fluffy fox like tail. The day I got her home she started sneezing and drooling all over the place. The vet said it was the cat flu and very common in shelter cats almost like when dogs get kennel cough. The stress from her new environment only exacerbated it. She was put on antibiotics and I placed her in a solitary room with food, litter box, bed and humidifier and would go in from time to time and comfort her.

I introduced her to Barney my male kitten by rubbing his face with a towel and placing it in her room. I did the same with her towel and placed it in his room. I also put some treats on both sides of the door so they could smell each other. When she was well enough, I cracked the door slightly so that they could see each other. Because she came from a household with several other cats, she was eager to meet Barney and did not hiss or growl. However because Barney was born to a feral cat mother and not used to other cats, he did hiss. I sat on the floor and held her in my arms and pet her and just let Barney calm down and eventually when he realized that she was not going to be a threat, he came over and smelled her.

Later that same day I sat with them both again while holding one and let them sniff again. I did this several times until they finally accepted each other. Let me tell you, Honey AKA Honey Buns is one sweet little girl. She LOVES people and goes to everyone. She purrs louder than any cat I have ever heard and loves to be fussed with. She has a pillow fetish and her favorite game is to catch things I am playing with under the pillow including my hand but she never puts her claws out and is soooo gentle. She just loves to chew anything, especially the string on the vertical blinds so I always have to say NO! She loves to drink out of all the sinks in the house and plays with the water with her paw. I have also trained her to sit for treats. When it comes to meal time, she usually lets Barney eat first although they have separate dishes and sometimes will eat together. Everything she does is very dainty and lady like. I thought Barney would be too much for her but you would be surprised, sometimes she lets him have it by shaking her fluffy behind and then pouncing on him!

I certainly would love to know what her background is. I would not be surprised if she had some Ragamuffin or Ragdoll in her because she loves to be picked up and just lay in your lap. One funny thing that she does to try to get my attention is bite my cheek but ever so softly as if to say "mommy, I don't want to hurt you, but I want you to play with or pay attention to me".

Hi Wendy Honey is very attractive and Barney very handsome. Thanks for sharing. The link in the middle of the page leads to bigger pictures. Thanks for providing high quality pictures...Michael

From Honey AKA Honey Buns to Domestic Cat - Moggie