Siamese are dark cats with a pigment-inhibiting, temperature-sensitive gene which removes some of the darkness when the temperature is warmer.

Yes, Siamese cats are dark coated believe it or not. But they have a gene which inhibits the pigmentation in the fur if the cat’s body temperature rises above a certain threshold. I guess we have to think of the Siamese as a cat who has evenly dark fur all over and which is then modified by making the coat lighter in those areas of the body where the temperature is higher than the threshold. The areas of the body where the gene does not take effect are those below the threshold. These areas remain dark. They are at the extremities of the cat’s body which are naturally cooler because the blood vessels are constricted in cooler conditions to ensure that the core body temperature is correct.

All White Siamese Kitten. Just born and all-white because of the heat in the mother’s womb. Photo by BlackZero_007.

The extremities are the ear flaps, the lower half of the legs, the paws and the tail.

Kittens are born very pale all over. This is because they have just come out of their mother’s body which is as warm as toast. As they become older they develop the familiar ‘pointing’ which makes the Siamese cat so special. Further down the line and into old age, you’ll see elderly Siamese cats with darker fur overall. The flanks of their body’s are much darker and it is shaded and uneven. The points remain visible but with less contrast between them and the remainder of the body. 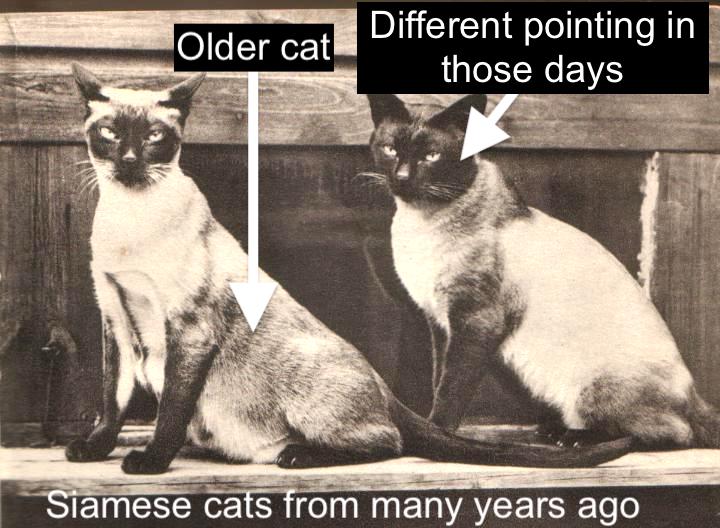 Siamese cats from years ago showing different pointing. Modern Siamese cats also have more slender bodies due to selective breeding because the breeders wanted the cats to be more ‘elegant’.Photo in public domain.

Looking at some old photographs of Victorian Siamese cats (over 100 years ago) the Siamese cats look very dark (see photo above). There may be two reasons for this. Selective breeding over the intervening 100 or more years has probably increased the contrast between the points and the centre of the body and secondly they are probably elderly cats.

There are two other examples of Siamese cat life which tell us that the Siamese is temperature-dependent. If a Siamese cat has a foot injury which is subsequently bandaged after treatment, the dark fur at that part of the body is lighter when the bandage is removed because the bandage made the foot warmer.

Shaved cat has different colored fur when shaved. This is a cat that has the Siamese cat pointing gene. Photo: Twitter.com

Secondly there is a very interesting photograph of a Siamese-type cat on this website (see above). The cat is not a purebred Siamese but he/she has the Siamese gene which makes the production of fur pigmentation temperature sensitive. An area of fur had been shaved from the cat’s flank. That area is darker than the remainder of the body except for the extremities because it is cooler as there is no insulating fur at that point.