Tigers communicate with a combination of vocalisations, scent marks and visual signals. Each tiger hunts alone but they live within a social system and their system is maintained through communication. 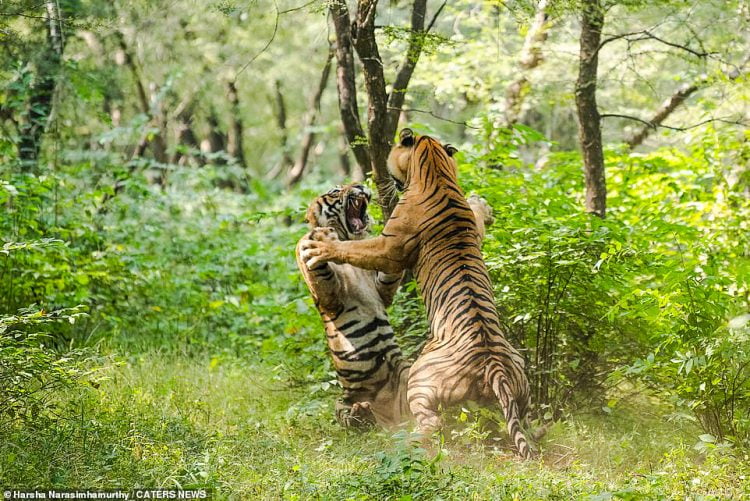 An expert on tiger vocalisations is Gustav Peters. His work is referred to by Mel and Fiona Sunquist in their masterwork Wild Cats of the World. The tiger has a range of vocalisations including: coughing snarl, hiss, spit, meow, moan, grunt, snarl, growl, prusten and their main call.

The coughing snarl is a loud, harsh and short call with the teeth bared and the mouth open. It is used when attacking prey.

It is also said that tigers make a sound similar to the alarm call of the sambar deer which is a “pooking” sound. The sambar deer is one of the tiger’s main prey animals. It is believed by another scientist, Schaller, that the sound is made to advertise the tiger’s presence and to avoid sudden encounters.

Infrequently, tigers also make a sound described as a “woof”. They can be delivered in a short explosive way if they are surprised or startled and they also make the sound when they are hit by a tranquilizing dart.

Although it is said that tigers are not technically roaring cats, they do roar as we all know. This is a call which carries at least three kilometres. When do tigers roar? In a variety of contexts and circumstances. The tiger might raw before mating, after killing a large animal, during mating and when a female is beckoning her young in the words of Fiona Sunquist.

The roar is made as a form of long-distance communication and therefore it advertises the animal’s presence and location. How it is responded to depends upon the message.

Female tigers advertise their receptiveness to sex with roaring. It is used to summon a male.

Moaning is a form of subdued roar. It is often made when walking along with head down. It is audible over a distance of less than 400 metres.

Close range vocalisations when greeting and reassuring or appeasing another include grunts and prustens. The prusten is a staccato popping sound. It is audible at close range and is part of a tiger’s greeting. A tiger might make this sound towards their young in order to make contact and maintain contact with them and to give instructions. The sounds are also made during courtship and mating.

Visual signals are made by the tiger’s facial markings. This applies to close range communication. The experts aren’t sure but it is possible that tigers recognise other tigers through their stripes and marks on the face and body which are unique to each tiger. They might use these aspects of each other’s appearance together with scent.

The back of a tiger’s ear flaps (pinnae) are marked with a clear white spot. During aggressive interactions the ears point backwards and the white spots are visible to the cat opposite. The signal is that the tiger is aggressive. The white spots may also provide a signal to cubs to follow their parents in difficult vegetation and dark conditions.

Tigers also scrap the ground with their claws to leave a visual signal (see below). 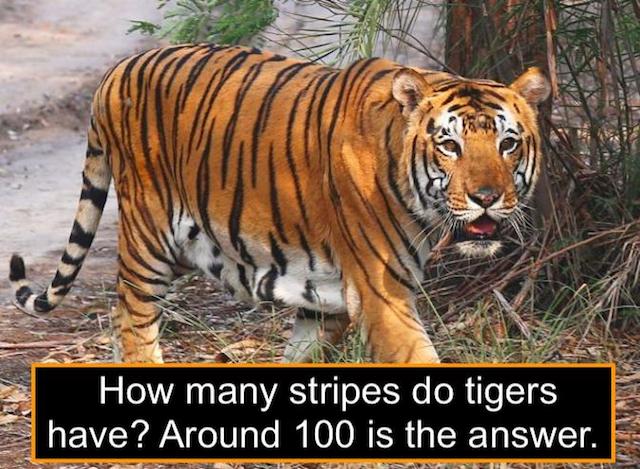 How many stripes do tigers have? Image: PoC.

Boundaries are scent marked more intensively than interiors. The most intensive marking takes place where “major trails intersect or run along a mutual boundary”.

Females mark at close intervals and more often than males. To give an example of how a female tiger marks territory, a three year old in Chitwan sprayed 49 trees per month having visited a 500 metre stretch of boundary eight times per month over a four-month period.

Scent marking also bring males and females together. For the female tiger scent marking increases to a maximum just prior to oestrus it then declines during and after oestrus.

Scent marking must be placed at conspicuous places and the scent must be topped up. If the urine is deposited at a higher level the scent covers a wider range than when deposited on the ground. Typically tree trunks are targeted. Leaning trees and rock overhangs are favourites. The rate of depositing sent depends upon the individual and the circumstances. Some odours may serve a variety of social functions and tigers are quite social in communicating through the odour of their scent combined with visual signals and their vocalisations mentioned. 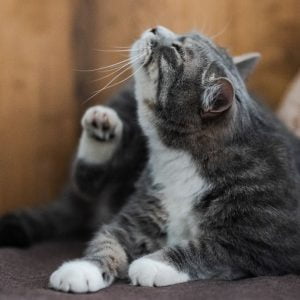 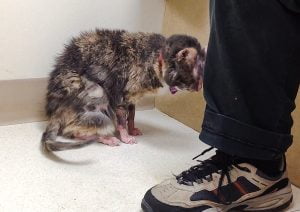 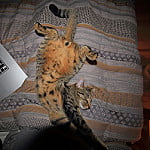