How fast can a cheetah run? This is a question that often arises because the cheetah is the fastest land animal on the planet. Sometimes a little bit of exaggeration can creep into the claims. 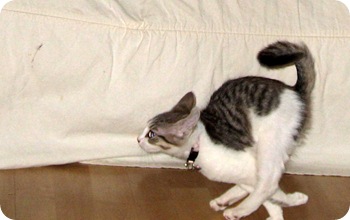 The humble domestic cat can run at about 30 mph top speed. Photo by Malingering

A recent article in the newspaper prompted me to revisited the subject and this page is, therefore, an update on a comprehensive page that I built about cheetah speed. I explain on the page how cheetahs do it (see cheetah speed). I can more or less summarise that page in one or two lines here in respect of the findings. The most conclusive and accurate test of cheetah speed was made over a set course, 220 yards (201.2 metres). The cheetah was a 35 kg female; an orphaned cat raised on a Kenyan farm and the timings took place in Kenya. 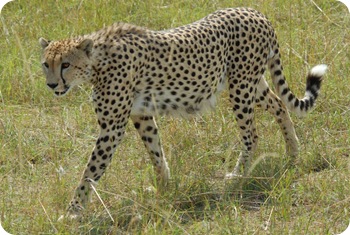 The cheetah is built for speed not endurance – photo by sallylondon

The start was a running start, meaning she was running at the point where timing began. Over three runs she averaged 7 seconds for the 220 yards, which works out at 64 miles per hour or 103 kilometres per hour or 29 metres per second (Timed running speed of a cheetah by N.C.C. Sharp (School of Physical Education and Sport, Brunel University)). I think that you will find that this is the most definitive measurement of cheetah speed except for the following:

In a Times newspaper article of 11th September 2009 a cheetah called Sarah, who at the time of the recorded speed was 8 years old, covered the standard 100 metres race distance in 6.13 seconds. It does not say, but this must be from a standing start when compared with the 200 metres course mentioned above which took only a little longer to cover. Sarah is claimed to have set the new land speed record for all animals. But what about the Kenyan cheetah I mentioned?

The great flexibility in the body of the cheetah makes her designed for sprinting over say a maximum of about 400 metres, which incidentally would make her good at 400 metres runner too. Usain Bolt is also good at 400 metres and originally trained to race at that distance but he found the training too hard (he admitted this)!

Note please: the original video of a cheetah being timed over a course has been removed as the maker of it removed it from YouTube – no idea why.

What about other fast animals? Well, the horse is fast too, but is built for endurance and speed not just speed. The fastest a horse has run is reportedly 43 mph over a 400 metres course from a standing start. A good, humble domestic cat can run as fast as the world’s fastest man (30 mph). Now that puts the domestic cat in perspective too.

Greyhounds can do 33.5 mph and the serval wild cat 50 mph. Thompsons gazelle can reach 59 mph. But the most impressive of all, for me, is the Mongolian Ass, a very humble animal none of us have heard of. This creature can cover 16 miles (28,000 yards) at an average speed of 30 mph.

How Fast Can A Cheetah Run? to Wild Cat Species