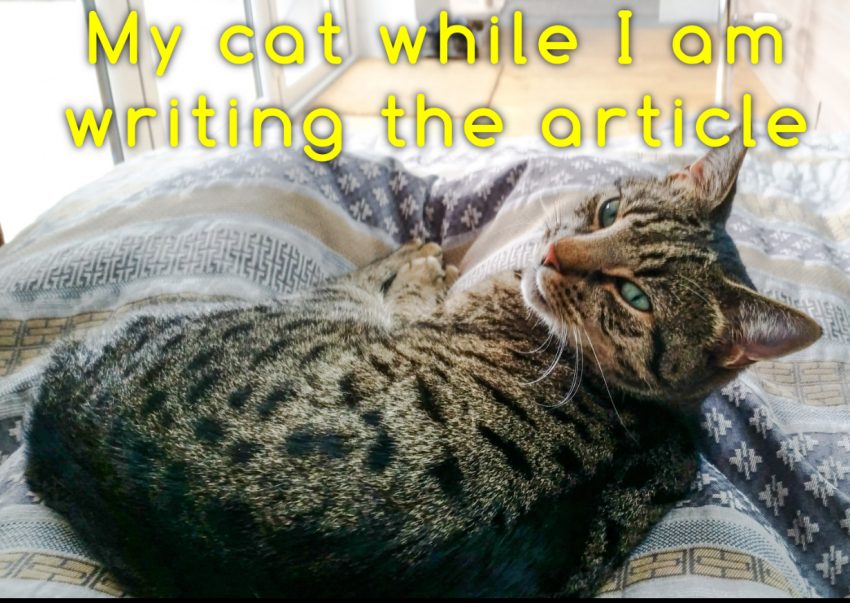 This is how I stopped my cat biting me. I was prompted to write the article because I have just read an article by Lena Bay on the Quora.com website which explains how she pretty much stopped her cat biting. She used a similar technique to me so I think it’s worthwhile discussing.

Both my cat and Lena’s cat were street cats. This, I believe, gives them a slightly wild nature which encourages them to bite. It’s a desire to hunt and kill by biting. In my case he used to bite my feet and occasionally my hand. It seems that Lena’s cat bit the same areas which are obvious areas for a cat to bite in any case.

The way I fixed it was to basically tell him off as if I was talking to a human. That might sound ridiculous but that’s what I did. I pushed him away when he bit my hand and told him in quite a loud and firm voice that he mustn’t do it. My demeanour changed and I ignored him and I believe he got the message that I was unhappy and fortunately he associated my displeasure with his biting habit.

Association between action and consequence

Once you’ve achieved that association you’re halfway there it seems to me. Punishment is not an option in my opinion and neither is strong negative reinforcement which is the same as punishment. But you have to train the cat to understand that biting is not acceptable and therefore I believe there has to be an association in the cat’s mind between biting and something slightly unpleasant happening which is not harmful to the cat but recognizable as an undesirable situation.

Recognizing when it will happen – preventative action – learned behavior

Having pushed him away and talked to him firmly and also shunned him afterwards for about a day, he did as mentioned understand that I was unhappy when he bit me. The result is that I can now recognise his body language which tells me he might be in the mood to bite. Also he’ll do it in certain places and at certain times. This also mirrors Lena’s experiences with her cat.

You basically learn body language, routines and movements associated with biting which allow you to take preventative action. What I do now is I tell him not to bite me in the same voice and tone that I used to criticise him after he bit me so once again he associates that tone to my happiness at being bitten by him. This stops him following through with his desire to bite my foot or hand. Once again the association between action (bite) and negative consequence (my unhappiness) has to be learned by a biting cat.

I have seen people advocating spraying water and such things but these are too strong and they are punishments. They are liable to hurt the relationship.

Job done, in the words of George W Bush! Well, not quite but almost. Although, I have to remain vigilant. He does still bite occasionally but it is much more gentle and nothing like before in terms of strength and aggressiveness.

You can’t blame him because this is a legacy of being a feral cat, I believe. Also it is ultimately about not having the opportunity to hunt for prey. If he did have the chance to hunt I think it would help remove the desire to bite. But my cat is a confined cat in a garden and a home. This a lot of space but it is not total freedom and the opportunities to hunt are restricted.

In substitution I should play with him more often. I do play with him but not enough. Playing with him and allowing him to bite during play would help alleviate his desire to attack my foot. It’s a combination of methods which gradually chip away at this habit.