How Long Do Cats Live? 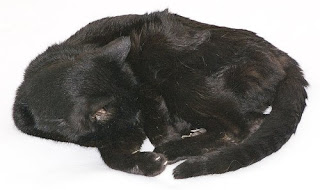 How long do cats live? This is quite a sticky question in some ways.

My moggie stray cat that I rescued and who has given me so much pleasure and who is, I confess, overweight, is still going strong (fingers crossed) at aged about 18 years or more (at March 2010). I am not sure of the actual age as she was picked up off the street.

Yet, in contrast to that I read about a women who bought several Modern Siamese cats from a breeder and she was lucky (no, the cats were lucky) if they lived beyond aged 10. That is not to say that all Modern Siamese cats live short lives, they do not. In her case the immune systems of her cats were compromised resulting in cats that were, it seems, rarely well.

In my experience a healthy well looked after domestic cat that does not stray widely (but who might venture out under supervision) should live to between, say, 14-20 or so years. These are figures that come from my head not a book. If the domestic cat strays and wanders then earlier death in accidents and catching a disease will, on average, shorten the life span by a few years.

The experts say that pure feral cats live for anything between 3-6 years or so, much shorter. This is because they are adapted for domesticity and not for being a wildcat in a suburban environment. The small wildcats, such as the Scottish Wildcat live about 11-12 years, so I am told. This slightly shorter life than the one I quoted above, for the domestic cat, is probably due to their harder lifestyle, despite their excellent survival abilities.

It is the controversial point about purebred cats that I am reluctant to raise here. Some say (one being the biologist, Desmond Morris) that the domestic purebred cat has a shorter life on average that the mixed breed moggie as the gene pool from whence they came is generally much narrower. The entire population of some purebred cats (Bengal for one) can be traced back to a few cats. Another entire breed that has a high cooefficient of inbreeding is the Burmese. There are others.

It is the natural desire by cat breeders to produce a wonderful specimen in line with the breed standard that can, on occasion, become so overriding as to effect the health of the particular cat and the breed as a whole. Inbreeding depression can take hold (weakened health due to recessive genes that are damaging to health coming to the fore and being visible rather than hidden). It is these cats that will have shorter lives, on average, for this reason. How long do cats live in respect of the purebred domestic cats? I would say on average about 9-14 years but this is not based on any survey just general reading.

Inbreeding is not confined to domestic cats. It has happened in the wild and in captivity for wild cats. The cheetah is inbreed and it seems to me that a substantial percentage of captive wildcats, the big cats such as the tigers and lions, are also inbreed. As the populations diminish inbreeding increases. We don’t see these “defective” animals, a travesty of the magnificence of these fantastic cats. But they are hidden away and probably killed for tiger parts for the Asian medicine market. Some of these animals have visible congenital defects. When we see what should be a fabulous animal reduced to that at the hands of humankind it makes me sick of humankind. These large captive wildcats might only live a few years with their deaths “unexplained” or explained away. However, captive wildcats can live for considerably longer than cats living in the wild, for obvious reasons.

However it is not all bad news, of course. A health tiger or lion in the wild in the good old days might live on average for 10-15 years or 16-20 years in captivity.

Neutering of domestic cats that roam has an effect on average age as unneutered boys will tend to fight more that neutered boy cats.

How Long Do Cats Live — Here is a summary:

How Long Do Cats Live — Here is a human/cat comparison chart taken from this page (a sub-domain of this site):

How Long Do Cats Live to Cat Facts

How Long Do Cats Live — Photo of old cat (not my cat, by the way, by penguinbush: