How to draw a cat using a camera obscura is discussed here. I didn’t want to present the usual sort of web page on this topic, which are essentially drawing classes tailored to cats. There are a number of videos on the subject to. These are also based on traditional drawing skills. Video, though, is a better way to learn the drawing skills needed to make a decent effort at drawing a cat for the first time. And I will presume that most people who search for, how to draw a cat, will be first timers because an experienced artist would use his or her existing skills and adapt them to drawing a cat. I will also assume that we are talking about a domestic cat.

On that basis, I am going to suggest using modern technology to recreate the use of a very old method that was used by a number of very fine and some famous artists in assisting them to draw and paint accurately. I am talking about the camera obscura. I believe that modern technology can replicate its use resulting in a quick and easy route to learn drawing to a proper perspective and scale,while at the same time fitting in with the modern desire for instant fixes.

What is a camera obscura? The phrase means darkroom, Camera = Latin for “room”, Obscura = Latin for “dark”1. Originally a camera obscura was literally a dark room with a small hole (about 1 inch in diameter) in it. Light, reflected off objects outside the room and passing through the hole is naturally focused on to a vertical or horizontal surface (if horizontal a mirror is used). The image so formed showed exact perspective and was a good basis upon which a drawing or painting could be created. Leonardo Da Vinci, in 1490, described of the camera obscura in his notebooks. The image is reversed and upside down if not corrected.

The use of a hole produced a relatively soft image. In the 16th century a sharper image was created using a convex (domed outwards) lens. Giovanni Battista Della Porta in 1558 in his book Magiae Naturalis, advised the use of camera obscura for drawing.

The dark room became a dark box that assisted in drawing. In the 17th and 18th centuries many well known artist used it including: Vermeer, Canaletto, Guardi, and Paul Sandby. Vermeer’s use of it was assessed from the camera like perspective of his paintings. People in the foreground were 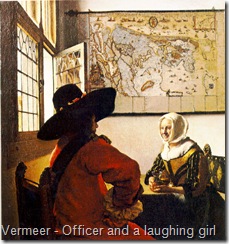 noticeably bigger. The use of a wide angle lens (to get in as much of the room as possible) must have been used as wide angle lenses allow a person to be near the camera and still in focus and in the image. This creates a great sense of depth in the image and painting.

The image formed by the camera obscura was traced and copied in situ much like using tracing paper. Of course camera obscura were used with live subjects who kept still. Cats don’t keep still, which leads me to the modern day version.

The modern day version of the camera obscura is the camera and the modern camera is a digital camera. The prices are now extremely reasonable it not down right cheap.

There are alternatives, however, that preclude the need for the purchase or hire of a digital projector. Modern digital cameras can be plugged into a computer to allow manipulation of the image, uploading it to the internet or transmission to a television (with the right equipment). The resultant image on a television screen would be very much like a camera obscura image only better as it comes from the screen to you rather from behind you. This would make tracing it much easier. Although, using a conventional camera obscura it is possible to let the projected image pass through the paper and trace from that side. In other words the paper becomes like a transparency.

An even better process would be to plug the camera directly into the television, where the

equipment allows, and use the television image in the same way, as a starting point to trace around and get the perspective and scaling accurate before standing back and looking the cat in real life (if it is your cat that is being drawn) to put in some fine detail.

I don’t think the detail of the subject matter is a problem. The difficulty is perspective and scaling and in this method of how to draw a cat those difficult bits are mastered almost instantly and can be refined until your eye requires the aid no longer.

A lot of modern digital cameras can be plugged directly into the television so people can see their still images of movies on their large flat panel screens. Projectors are less well known. Here are just two examples.

Yes, cost is a factor. But they are cheaper in the United States and they can be hired. Also if hired for one day all photographs can be projected and traced for completion at another time. Hire costs are more manageable of course.

How to draw a cat using a camera obscura (modern version):

I made an earlier post that shows a series of videos on how to draw a cat.

How to draw a cat using a camera obscura — notes

1 http://brightbytes.com/cosite/what.html — How to draw a cat using a camera obscura