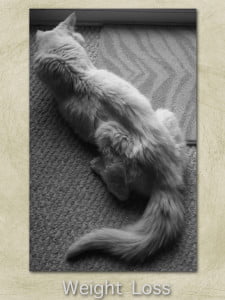 Animal rights organisation PETA recently came under fire for launching a CGI laden video simulating the shocking results of animal abuse. In the video, a domestic cat called Rufus is seen performing tricks for its owner and is brutally hit when it shows reluctance. The video aims to show the viewer how large cats are being subjected to similar training techniques around the world daily. While animal performers are becoming less common, the subject of animal abuse is not, and it’s not just limited to wild cats. In the US, the ASPCA believes a case of animal abuse occurs every minute. This covers everything from physical abuse to abandonment and malnutrition. Malnutrition is also associated with some diseases.

Symptoms of malnutrition and supplements

The symptoms of long-term malnutrition are easy to see. Weight loss, fatigue and muscle weakness are prevalent along with psychological issues such as depression and even neurosis. Like humans, a cat’s physical appearance can alter in subtle ways in the earlier stages of malnutrition. A lack of calcium and vitamin E will cause dry, scaly skin, caved in nails and lacklustre hair which is sparse in patches. Vomiting, diarrhoea and lethargy can be signs of depleted vitamin B12. This can be easily treated by offering liquid or paste probiotics mixed into a cat’s food to aid absorption. Adding omega 3 fish oil to a malnourished cat’s diet can also be of great benefit, but it’s essential to have established a stable eating routine of 3 days or more to avoid upsetting its digestion.

Reintroducing food slowly is essential to prevent “refeeding syndrome,” a disorder that can cause electrolyte imbalances and result in death in extreme cases. Small, palatable pieces of plain, cooked turkey or ham without added salt can provide a good short-term option for a malnourished cat because of its high protein content and low fat content. This makes it quite easy for the cat’s body to process providing a fresh water supply is available to fight off the dehydration that often comes with malnutrition. White fish is another good option, and if flaked well can be mixed with water to increase a cat’s water consumption.

One alternative to the options above would be to supply a moist cat food, which is well balanced and full of nutrition. Wet cat food is easier for a malnourished cat to eat because of its soft consistency which requires little effort to chew, and it’s packed full of water that can help ease dehydration and the constipation that can go along with it. Wet cat food is better composed than the dry alternative, too. Cats are obligate carnivores, meaning they need muscle-based meats to survive. These meats contain taurine which is essential for good eye health and prevents tooth decay. It makes sense then, to provide a malnourished cat with a high meat content food. While dried food does contain meat, the content is often much lower than moist varieties such as Webbox wet cat food. It is generally bulked out with harder to process carbohydrates making it a less suitable choice.

Good veterinary care should be provided for any malnourished feline to prevent long-term health issues and to diagnose the cause of malnutrition. Sometimes malnutrition is down to mistreatment, and in other cases an underlying health issue can be the root cause of a cat’s dietary issues. Be sure to discuss any previous feeding attempts with the vet who will be able to advise you further on foods and supplements for your cat to nurse them back to good health.

FIV is an infectious disease with signs that are similar to those associated with other immunodeficiency disorders such as severe malnutrition. Malnourished cats may not be capable of responding to a disease challenge by developing antibodies on being given a vaccine. Malnourished, rundown cats who have lost their ability to keep themselves groomed can acquire lice which are usually found beneath matted hair around the ears, head, shoulders and neck. Kittens with an enlarged oesophagus (a congenital disease) have difficulty swallowing leading to possible malnourishment and stunted growth. Inflammatory bowel disease is characterised by a variety of symptoms including weight loss, anaemia and malnutrition. Cats suffering for malabsorption syndrome (a non-specific disease caused by an underlying disorder of the small bowel, liver or pancreas) suffer from malnutrition. The early signs of diabetes includes unexplained weight loss due to a drop in appetite and an inability to metabolise blood glucose. Cats that are more likely to develop pneumonia will be those who are malnourished or with a suppressed immune system.