This is about selecting a proper Maine Coon cat. I have picked out five major Maine Coon appearance characteristics which should distinguish a genuine, pedigree Maine Coon from a Maine Coon mix, of which there are many on the market.

Also, some genuine, registered Maine Coons are not to type, meaning they have not been bred to the breed standard and don’t have what I consider to have the outstanding appearance traits of this top purebred cat. Breeders don’t always get it right. Under these circumstances, what you end up with is a cat that is very nice but which is hard to distinguish from a random bred cat.

Please don’t misunderstand me. I love random bred cats. I love normal looking cats. The Maine Coon should not be extreme.

This cat should be normal looking but with certain features, which give it its characteristic appearance.

For me these are the important characteristics to watch out for.

I believe that Maine Coon breeders would concur with me in my selection. If not please leave a comment.

This is what the ears should look like. Don’t accept anything less! 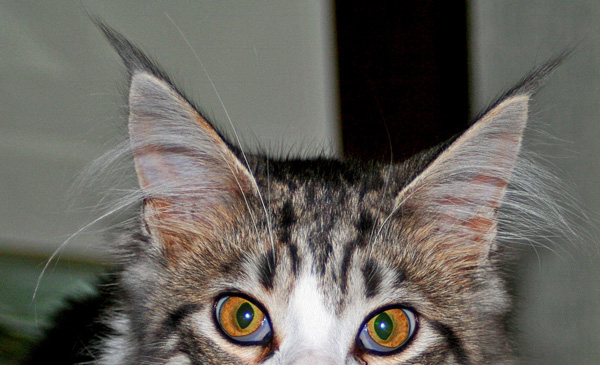 The ears are large with a tuft of hair coming out of the tip, which makes the ear look larger. It is very similar to the wild cat species called the lynx hence the name. The cat in the photo also has a lot of fur in the ear flap. Breeders call ear fur “ear furnishings”.

I have chosen a comparison between the Maine Coon (MC) and Norwegian Forest Cat (NFC) to highlight the MC’s square muzzle because the muzzle of the NFC is relatively pointed but other than that these cat breeds are quite similar.

The breed standard is clear on this, “heavy and shaggy”. The coat shouldn’t be too tidy, too even or too short. The best picture I have to show this is quality is one that I took several years ago of Zak. You may know the picture. It is on Flickr. God, he is a beautiful cat. I love Zak. His coat is very shaggy and his personality is very sweet. His muzzle is to type as well. 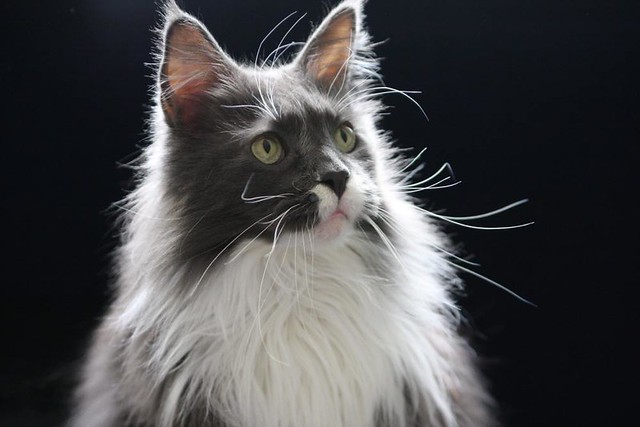 Maine Coons are large, the largest purely domestic purebred, pedigree cat (as compared to the wild cat hybrids) but not all MCs are large especially the females but they tend to unfold into long bodied cats. This feature is embodied in the fact that the so called world’s longest domestic cat is a Maine Coon named “Stewie“. The point is made but to be honest I have seen longer Maine Coons.

And below is a Maine Coon I jokingly called “the world’s tallest domestic cat“. You can see why! 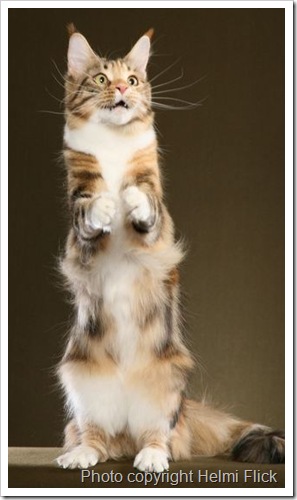 Watch for this one. The great pictures of cat tails have been taken by Helmi Flick and the best tail of all is on Creme Soda but only just as there are other super “MC Tails”. The term “plumed tail” speaks for itself. The breed standard simply says: “long, wide at base and tapering. Fur long and flowing”.

Make sure that the MC you see has these features and even if he or she doesn’t have papers (registration documentation) you can be fairly confident you are looking at a true Maine Coon cat. I rank this cat the most popular domestic cat in the world even beating the Persian.

These are my tests for a proper Maine Coon. What are yours?

Note: I have deliberately avoided discussing personality traits in this post. It is about appearance.