I have a Turkish Angora cat from Ankara

I am from Ankara, the capital of Turkey and I have an Ankara cat. We call them "Ankara cats". She is pure white with green eyes and is very beautiful and intelligent.

I don't have a pedigree chart, but my vet yas it is definitely an Ankara cat. She is 12 years old now. Her name is Pamuk. 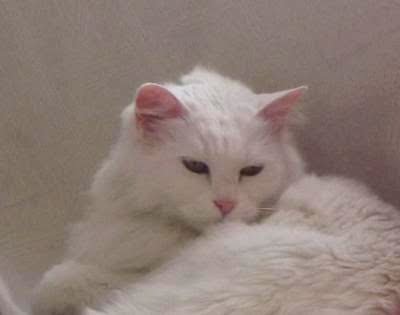 PAMUK -- A slightly lighter picture showing how beautiful she is
- photo copyright Sanem. 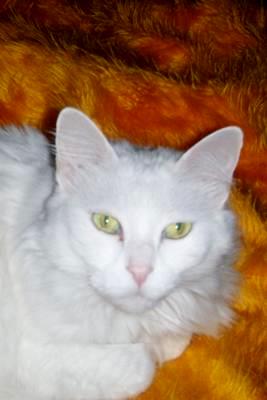 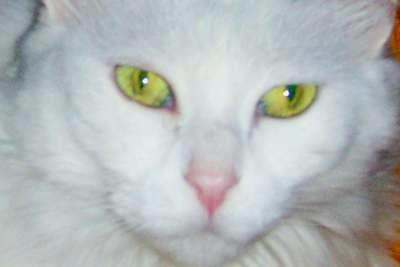 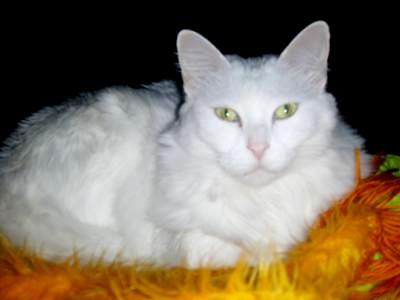 Here, in Turkey we tell the Van cats and the Ankara cats apart by their face shapes. Ankara cats have faces shaped like wedges, Van cats have rounder faces.

Ankara cats have smaller ears and Van cats have bigger ears. Ankara cats don't like water or swimming. My Pamuk is very smart. She eats what she likes, not what you give her. She calls me before she uses her litterbox, and after she has used it she calls me again and gets me to clean it.

She hates dirt. She never lets me groom her fur and tries to bite me. But I think she does better herself, because she never has a hair out of place.

Pamuk never touches anything that you don't give to her. You can leave her alone with meatballs, chicken or fish. She doesn't even take a look.

She learns very easily. For example, I prefer her to stay out of my son's room and she knows this and sits at the door and stays there. From time to time she wants to go in and takes a step but I just say her name and she gives up.

Pamuk is also very courageous. I have another cat, Miço. He is somewhat aggressive and tends to have anger fits. When Miço has an anger fits even I stay away from him because he scratches terribly. But Pamuk puts herself between us and Miço and tries to defend us. She is a heroine.

When I looked at the pictures of Turkish Angora cats above, I thought that nobody in my country would believe that they are Ankara cats. First of all, they are colourful, we (ordinary people I mean) accept only the pure whites as Ankara cats. Our streets are full of cats like the ones in your pictures.

No matter what their fur color or eye color or breed, I just adore cats.

In the picture Pamuk is with my sister and niece.