↓
Home→Cat Behavior→allogrooming→I have one cat that likes to chew on my hair while I’m sleeping. Why? Two reasons.

A visitor asks: I have one cat that likes to chew on my hair while I’m sleeping; why? There are three possible reasons as I see it. Yes, one more than in the title! 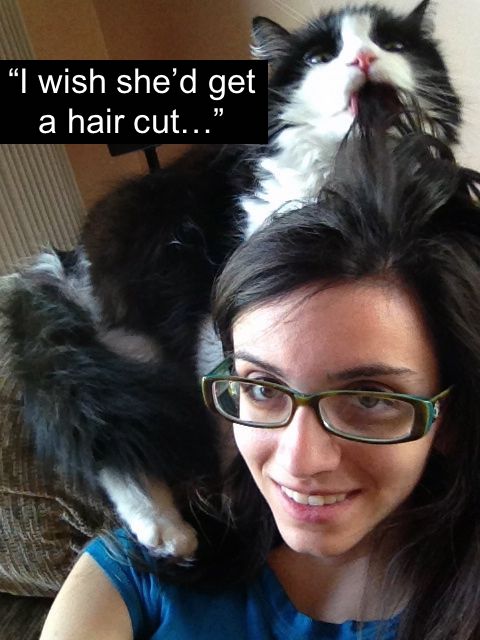 The first and main reason is that your domestic cat companion is grooming you because she sees you as either a surrogate mother or a kitten depending on the circumstances. Either way she regards you as a cat associate or friend. The relationship could even be closer. You might be imprinted on her as her mother.

Under all these circumstances your cat might try and groom you which would occasionally mean trying to groom your hair (she probably licks you as well).

It won’t work well because human hair is not designed to be groomed by a cat’s tongue. It’s not dense or even enough plus it is usually too long. She’ll probably chew on it or pull it with her mouth. She may try and spit it out! 🙂

But it is all in an act of kindness and friendship despite being a failure.

There is a variation of grooming human hair. A cat might chew on your hair as an act of play. However, this would not happen at night. It might happen if you are lying down and she is lying down next to you near your head and she becomes a bit frisky.

If it always happens at night and you are asleep, another reason is that she is probably trying to wake you up. Domestic cats are bemused by the sleeping habits of their human companions.

The biological clock of the human is diametrically opposite to that of the domestic cat – almost. It’s not quite because cats are active day and night but they favour dawn, dusk and night depending on the individual cat’s preferences and the environment. This means she gets frustrated at about 4 in the morning and wants some activity from her large, strange looking, bald cat companion.

Very rarely my cat tries to groom my hair. It is a strange type of attempted grooming. It’s something between chewing and licking and lasts about 20 seconds at which point he realises it’s a failure or I’ve had enough and stop it.