↓
Home→Uncategorized→I think I may have rescued a beautiful Chartreux

I think I may have rescued a beautiful Chartreux 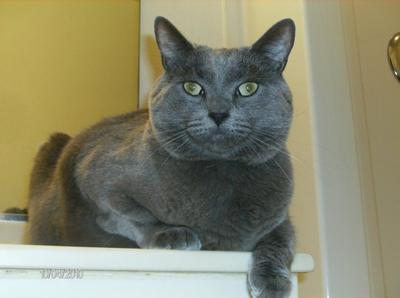 About 5 years ago I decided my domestic shorthair, a black cat named Mr.BoJangles needed a cat-companion. He seemed bored all the time, didn't want to play, and was showing a lot of aggression and discouraging behavior.

So I went to the local shelter here in New Jersey and fell in love with a gorgeous male kitten (or so I thought, they told me he was actually at least a year old and possibly two) who had the softest gray fur I'd ever felt and shimmered like he was dusted in glitter.

I named him Smudge because of his smokey gray coloring. He was so sweet tempered when I played with him that I thought he was declawed, which he is not.

He has still never used claws in play with humans. I also thought he was mute, because you would see his mouth open but hear no sound. So I got my new cat home, the two bonded immediately, and all is well.

However I got to wondering exactly what type of cat I had gotten. In the 6 years I've had him, he's gone from kitten size to being 13lbs.

He has short little legs, acts "boneless" (he gets into these crazy positions that should be hard even for a cat). He also does this odd thing I call "roosting" where he lays his head on his side, while leaning against a wall, and sleeps almost like a sleeping bird would.

It looks uncomfortable, but he does it all the time. Also, he has developed a very powerful voice. The cat I thought was mute, went from making no noise, to mewing very very lightly, and now that he's 8 years old he is as loud as any other cat.

He is very attached to me, and me alone. He's friendly but a bit skittish with other people. So my question is, did I rescue a Chartreux?

It's hard to believe one of these gorgeous cats was left at a shelter, but you never know. Please let me know your thoughts. I have included a picture of Smudge at 6 years old.

Hi Jennifer... thanks for asking. My immediate feeling is that Smudge is a Chartreux. He has a special purebred look. You don't get that sort of appearance in random bred cats. In short he looks selectively bred.

However, you have no pedigree to prove he is a Chartreux and they are pretty rare as far as I am aware.

Also his eye color is not copper or orange. That is the breed standard for this cat.

All that said, you may well have a Chartreux. The problem is we can only speculate because you can't say for sure a cat is purebred from appearance alone. You need records of parentage etc.

Smudge sounds like a interesting cat and a great companion. And as I said he looks special. I have seen thousands of cats in building this site and only rarely have I seen a cat that I think is purebred when a visitor asks. This is one of those occasions.

Incidentally I have also see a blue Russian bred British Shorthair who looks a bit like this (large cheeks). But Smudge's muzzle seems to be perfect Chartreux.