I wanted a Turkish Angora but adopted an orphan instead

His name is Wow and that is what best describes him. I wanted a Turk but adopted an orphan instead...except the orphan turned out to be a Turk! Wow. No papers of course but all the characteristics: long ears, paws and body, loves water, athletic and graceful as a ballerina.

Smart as a whip, teases the dogs, pounces on me gently doesn't cuddle very much but is always nearby. Truly a Wow cat!

Tiger stripes on back and white in front. The markings on his front paws form a heart when he sits in a certain way...His tiger fur is silky and his white fur is as cloud soft as cashmere. His ears are tufted like a lynx and his voice is soft and expressive... No words describe him as well as simply Wow! 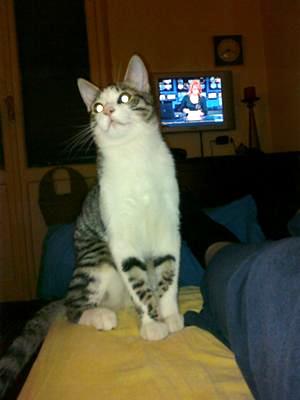 Wow with 'heart' on front paws

Little Wow is growing up and looks more and more like a Turk. My vet says he may be a 'Napoletano' Turk (meaning a 'pirate copy'...). I'll keep posting updates.

Hi Corinne.... I took the great liberty of changing the title to a much longer one from your own words that sums up what is right about adopting a cat. Well done. He is a WOW...Michael