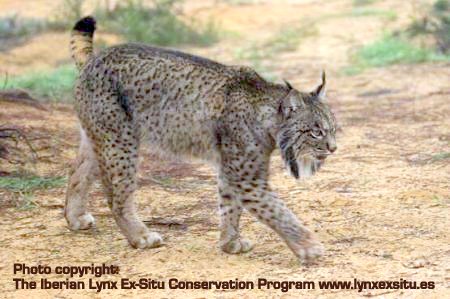 2009: I’d like to start the discussion about the Iberian lynx (Lynx pardinus) by looking at habitat, the distribution of this medium sized wild cat in Spain and Portugal which constitutes the Iberian peninsula with Andorra, Gibraltar and a very small part of France. It is the most important topic for this wild cat.

The Iberian lynx looks like a smaller version of the Eurasian lynx (Lynx lynx), 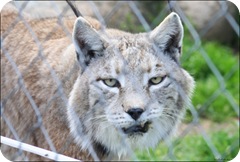 while only about half his size-adult males weigh an average of 12.8 kg and females about 9.3 kg (Flickr photographer). His photo is to the right. I think it was taken in a Madrid reserve or zoo. The shoulder height is 60–70 cm. Please see: Description of the Eurasian Lynx.

Originally, the Iberian lynx used to be found throughout the peninsula although it would have preferred certain areas over others.  Although adaptable, the lynx prefers areas of dense cover within a variable habitat type. The ideal landscape for this cat would be open forest and dense shrubs (for shelter) with open pasture to chase its favoured prey, rabbits. Although it has been forced to adapt to living in part wetlands, one of its last strongholds on the southwest coast of Spain (please see map below), the Coto Doñana.

Its wide ranging habitat has changed for ever.  As we know the Iberian lynx is critically endangered (see the Red List logo-classification above). A look at the starkly reduced distribution of this cat tells us about one reason why – loss of habitat. 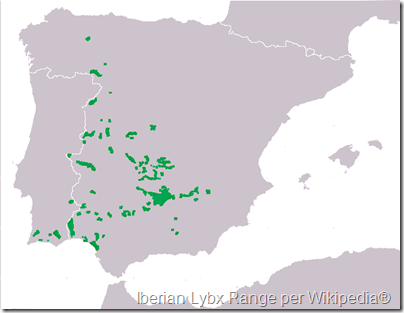 The above map presented on Wikipedia® seems to be well out of date if the IUCN Red List for Threatened Species™ (Red List) map is judged to be the better source material (which it will be). The map below is based on the Red List map and as can be seen the range is now two small areas marked in blue. It should be noted however that it is thought that the lynx is extinct in the other areas where it was found. This is not then a certainty but is probably the case.

More about the above map

The Red List map is hard to copy as it provides no markers and is too small in scale (it is small in scale because it has to include all of the peninsula as there are areas where this wild cat is believed to be extinct). I am very surprised the scale of the known habitat is as small as it is, though, bearing in mind the size of the range. The Red List do say in their text that the Iberian lynx is found in the Coto Doñana and near Andújar-Cardeña in the eastern Sierra Morena. 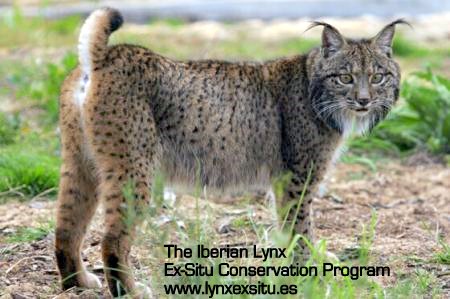 The Coto Doñana is national park (Parque Nacional de Doñana) indicated in the above map by the blue area and near Cadiz on the south western coast of Spain. It is a park area of wetlands and sand dunes on the Guadalquivir delta.

I have followed the Coto Doñana park boundaries (as shown by Google maps) but the Red List drawn map of this cat’s range in this area goes wider and it extends across a main road that is the western boundary (A483 going north) of the park and it to the estuary surrounding the town of Huelva. That wider area is very roughly enclosed by the red line on the map above. The red lined area is actually larger. It may be that the Iberian lynx inhabits areas beyond the park but these areas contain a landscape that is quite obviously less hospitable to a wild cat, judging by the map. But that said the lynx seems to be no less safe in the park than outside it (see below – threats).

In short the verbal description by the Red List does not seem to concur with the drawn map. I would have preferred a more detailed Red List map as it is the only map of use of the range of the Iberian lynx. It may be the case that the range is not known accurately but as it is so small and limited I would have though that this was not the case.

Also the other range to the north east and near Andújar is hard to replicate and is drawn from common sense based on the Red List drawn map and verbal description. 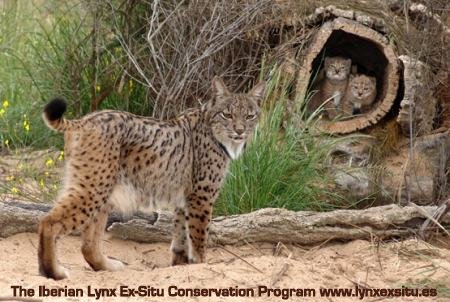 This photo and the ones above as labelled are by The Iberian Lynx Ex-Situ Conservation Program www.lynxexsitu.es (new window). They are the copyright of the conservation program and published here with their permission. The words on this page, though, are entirely my work.

Anyway, as can be seen the range is very limited and completely fragmented into two portions some 200 miles apart. Habitat fragmentation and reduction has been due to agricultural and industrial development. The planting of Mediterranean scrublands with pines and eucalyptus is an example (Red List).

75% of all lynx mortality on the peninsula are by non natural means (Sunquists). Without being too politically incorrect or sounding racist, I think it fair to say that the people of the Iberian Peninsula generally are not overly concerned with animal life. I make this assessment on the fact that there are relatively few animal charities in the area and based on a discussion with a colleague who lives and works in Spain. Animals are historically in existence for the benefit of the people in one form or the other.

The Iberian lynx has been endangered in the wild since the mid 1980 and almost nothing it seems has been done to improve that classification.

The population sizes are now so low and the situation so serious that this cat is likely to become extinct in the wild in the not too distant future. If it did it would be the first wild cat to become extinct in 10,000 years. It is probably the most endangered carnivore in Europe. So what sort of conservation has occurred? 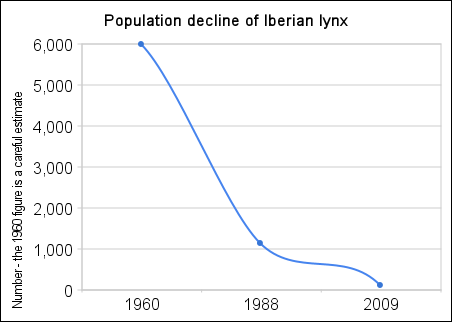 The above is based on Red List figures. The estimated figure for 1960 is based on 80% drops in population sizes over two measured periods. The 6,000 figure is a conservative estimated. In a telling indication as to the loss of this cat and its habitat, in 1992 Rodriguez, A | Delibes, M in a research paper headed Current range and status of the Iberian lynx Felis pardina Temminck, 1824 in Spain stated that:

There is a “management plan”. The plan was created by two organisation (ICONA and CSIC). The plan includes efforts to improve rabbit populations, reduce traffic deaths, reduce trapping deaths and to create corridors between isolated populations to promote more viable population sizes. The latter objective would seem now to be beyond attainment as there are are only two populations left as indicated in the map, which are many miles apart. Conservation becomes more difficult as the situation becomes more grave.

In the other area in the eastern Sierra Morena there are an estimated 150 cats at 2008. This is considered the limit for the area so some cats might be relocated. Off site breeding appears to be going well. Are things changing at the 11th hour?

The Iberian lynx is sadly a specialist when it comes to prey. It favours rabbits and the rabbit population has declined due to myxomatosis, Rabbit Haemorrhagic Disease, over hunting and habitat loss. The lynx will also eat rodents and birds. In the Parque Nacional de Doñana rabbit remains were found in 73-88% of lynx scats (feces) (Sunquists). Rats, lizards, geese, snakes and fallow deer as also mentioned are prey to the lynx but they come a distant second to rabbits. The lynx will concentrate on young red or fallow deer. The red deer is bigger than the fallow deer. The deer is killed by a throat bite causing the deer to die of suffocation. A large kill is hidden to preserve it for the next meal.

The lynx likes dense cover. In 2002 it was described as living in mountainous areas between 400 and 1,300 metres above sea level. That would not apply to the population in the Parque Nacional de Doñana, which now, at 2009, represents a major population for this cat species. The Doñana park consists of what is called “marquis” (scrubland) and marshes. It is an area where there are marsh-living birds. No doubt these form part of the adaptable lynx’s diet. In fact the Mallard duck is prey in the spring when the ducks move from the marshes to breed.

The marquis is used for rest sites in high temperatures in the daytime and as dens when nursing young cubs. They commonly hunt on the border (called vera)between the scrubland and the marshes (Sunquists). This area is where deer fallow deer are more likely to be found.

The Iberian lynx hunts at a variety of times depending on the individual and the season. In the summer they are mainly nocturnal and are more active at dawn and dusk while in winter activity is higher in daytime.

A male’s range will normally overlap the range of one female but will not overlap the range of another male.  Range sizes: males 10.3 km² and females 8.7 km². Although this information relates to the time when there was more habitat. The overall range size of the two areas referred to and the number of cats in those areas would seem to dictate smaller home ranges. The female range is naturally reduced when nursing cubs.

The Iberian lynx travels widely when hunting (e.g. 9.3 km for a male in one day).

Ranges are marked by scent markers – urine and feces were typically found at man made boundaries to home ranges such as roads, or natural ones such as the river to the south of the Parque Nacional de Doñana, the Guadalquivir.

This is best presented in a table (src: Sunquists):

Some books are in the public domain. Here are some extracts verbatim from a book thanks to Google Books repository:

The above is from Nature and human society: the quest for a sustainable world : proceedings of …‎ – Page 267 Peter H. Raven, National Research Council (U.S.). Board on Biology, Tania Williams – Nature – 2000 –

Wikipedia® map published under a Wikimedia Commons license and made by user: Fabio b