↓
Home→Uncategorized→In memory of Wilson Who Only Wanted A Home

In memory of Wilson Who Only Wanted A Home

Wilson was a beautiful Tabby cat. I assume he was just a moggie, but there's the chance that he had a bit of Bengal in him.

On the 28th of May 2009 my mother turned up at our house, I went outside to greet her and she insisted that I get inside the car. I went in, to find a beautiful Tabby kitten sitting on the passenger seat. He looked into my eyes, and I instantly fell in love. My mum told me that she woke up in the middle of the night to find him crawling on her bed, and several nights before she'd heard him crying outside. 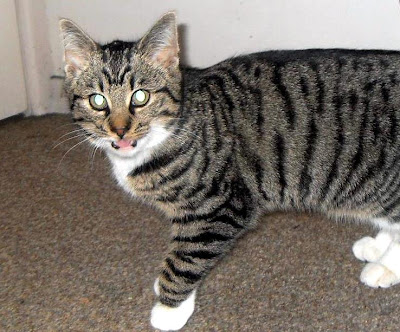 We took him inside and organized a litter box, a food bowl, and a water bowl. Surprisingly he took to all of them like a fish to water. I spent some time getting to know him. He was lovely, his way of a work out was paw pumping your arm so hard that it went numb.

At that point I had been into cats for about a year, and I knew enough to work out that he was about 5 months old, he was male, he wasn't neutered, and he was now indoors-only!

The same day I introduced him to my 8-month-old Abyssinian cat, Chilli. Chilli has always been a friendly fellow, so Chilli and Willi had opposite reactions to each other! 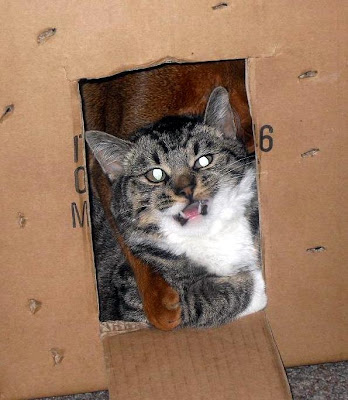 You can see Chilli's foreleg.
Wilson trying to take over Chilli's box! - Photo by Maggie

Wilson was hissing and getting very defensive, while Chilli was doing all he could to simply touch his new friend, his claws remained in, and not once did he hiss or show any signs of aggressive behaviour what-so-ever. I was very impressed.

As for Wilson on the other hand, there was no way he wanted to take to liking Chilli, so I thought, hmmm, what's every cat's weakness.... FOOD! So I sprinkled dry food pieces on both sides of the barrier, yet very close, both cats ate and got a bit startled when they touched each other, but after a while, they realised neither of them were of any threat, and that's when their friendship began!!

It took no time at all before I had them both racing around the house at all hours of the clock. And I have to admit, although they kept everyone awake, I loved it, the sound of happy cats was like music to my ears!

Time went on, though not much time, and Wilson was my best friend, and Chilli's best friend. He was literally a giant baby, I used to wrap him in blankets and nurse him in my arms.

But things turned bad, and Wilson started having toilet troubles, he refused to use a litter box and was doing his business everywhere. At first I thought it was just because Chilli had been using the same litter box as him, but then I realised that wasn't the case. I did everything I could, I scrubbed the litter boxes over and over to get any smell of another cat off them, but nothing worked.

I was threatened that if I couldn't fix the problem Wilson had to go, I contacted everyone I knew, they all had wonderful suggestions but nothing worked. And on the 14th of June I came home to find that Wilson was gone....

About a week later, I heard from my mother again, she told me Wilson had turned up and she'd taken him in, I told her to make sure he remained indoors only, but she said, 'he needs his freedom'.

I was disgusted and merely replied saying that an owner also needs responsibility! I cried for days prior, and after, Wilson's leaving. It felt so horrible to have him ripped out of my life, I couldn't even imagine how Chilli was feeling... 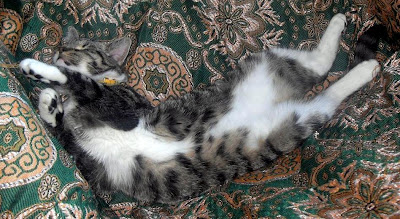 This shows off his undercoat, notice how it looks like he's
wearing a jacket that get's buttoned up in the middle.
Photo by Maggie.

Months passed, I hadn't seen Wilson but heard plenty about him, my mother had moved to a new place so I went to visit. It was the 6th of November, I turned up at the house and ran into the backyard, calling his name. I was so excited I was going to see my little man again, I missed him like no one could possibly imagine!

But again, my luck hit beyond rock bottom, I heard my mum talking, but couldn't make out what she was saying, until I heard "Yes, that sounds like Wilson!" and she burst into tears. The first thing that came into mind was that Wilson was there, despite the crying, I went over to mum, I asked her what's wrong, and she simply said, "Wilson's dead."

She was talking to a lady who I'd not met, she told me that she'd been walking home from work yesterday evening and she found Wilson lying on the side of road. She wrapped him in a blanket and kept him in her garage. Then the next day she went door knocking to find the owners....

Wilson was just 9 months old when he died. And everyday I regret not teaching my mother about indoor only cats, if only he'd not been outside, he wouldn't have been hit by the car and he'd still be alive today...

(A note to the administrator, may I please put up some more photos of this beautiful cat?).

Hi Maggie... OMG (to use the language of the young) Wilson was truly beautiful. He would have won at a CFA cat show in the Household Pet division, I am sure. Truly a classy looking cat.

And yes! - Please email me more photos (I will add them to this posting):

substitute at for @ please

I am so very sad about your story. The world is often too hostile for cats, domestic or wild (or in between).

Thank you for visiting and sharing but, really, this is a sad story.

In memory of Wilson Who Only Wanted A Home