Many families are being hit by austerity and are finding it hard to manage on the money they have coming in, but WHY are the cats in the family the first to lose their homes? 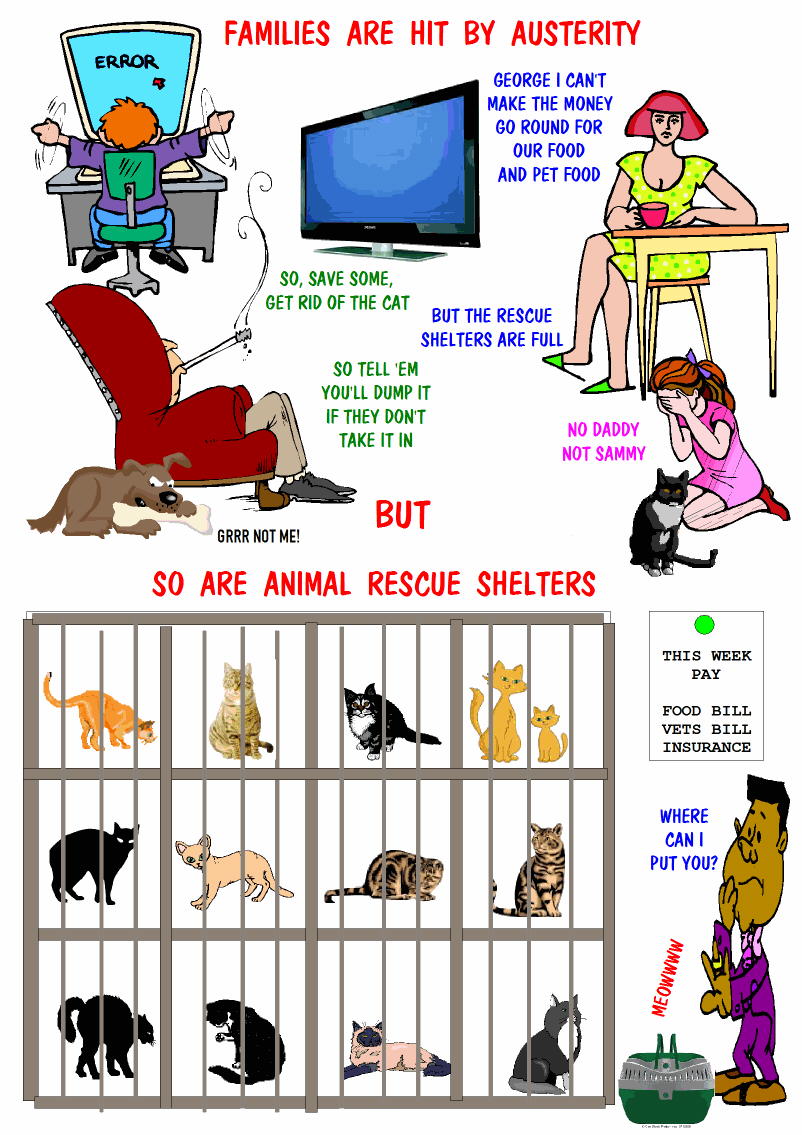 Hardship is being endured by some people, mainly unemployed people, but here is the worst thing about this, most of the people who say they can’t afford to keep their pet cat any longer can still afford to smoke and they have a TV, a computer and other non essentials.

Are material possessions and their own pleasures worth more to them than a living breathing animal? It seems so!

Just this week one person said that if things didn’t improve, the cat would have to go, not the dog, no, he didn’t cost as much to feed as the cat. It makes me wonder what the dog is being fed on. But in reality the truth is that the dog is more valued than the cat!

My heart aches for that poor cat soon to be homeless through no fault of her own and for all the other cats being cast out of the family too. They must be frightened and bewildered, in a strange place with no home comforts and not much chance of being adopted out because all Animal Sanctuaries are overflowing right now.

How can people add to this terrible situation by relinquishing their pets….. part of the family? Surely even if they don’t have an expensive lifestyle or possessions they could give up, they could budget for cheaper meals for the family and have enough to spare to feed their cats.

Yes, dogs are being relinquished too but not half as many as cats. Why are cats seen by some people as second class citizens?

Those people don’t give a thought to how the Shelters afford to feed more and more animals every day and pay their vets bills. Shelters get no free veterinary treatment from charities like the PDSA, which people on a low income can get.

Then when/if times improve will those people go back to the Shelter and reclaim their pet if he hasn’t been adopted? I doubt it, they will probably get a new pet, the old one forgotten.

The ‘I can’t afford to feed it’ excuse has taken over from the ‘my child is allergic’ excuse. Food banks for pets would be one solution but would some people take advantage and claim free pet food when they could well afford to buy it if they budgeted more wisely and cut out luxuries?

I think some would, because I’ve seen unemployed/unemployable people here getting free bags of groceries from food banks and returning home laughing, with a cigarette lit in their mouth. I think the only reason a pet should EVER be relinquished for good is that the caretaker is physically unable to care for him/her any longer

I personally would eat dry bread for every meal rather than part with our cats.