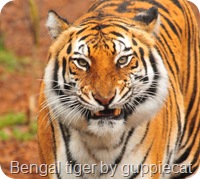 April 28th April 2010: Perhaps unsurprisingly a tourism ban has been ordered in the India tiger reserves in the grounds that tiger tourism is killing the tiger through love. I am pleased that something is being done to save the Bengal tiger, but tourism is ultimately good for the tiger provided it is managed well because it places a commercial value on the living tiger rather than a commercial value on the dead tiger. Surely that is better? The problem is how to strike the balance between tourism unsettling the tiger and contributing to the destruction of its habitat and creating a value on the life of the tiger in the wild, which must help preserve it.

It should be said right away that even in the Indian tiger reserves tigers are scarse. On occasions you might be lucky to see one. The reserves are perhaps too small and in some tigers were completely removed through poaching. Read more: Indian Bengal tiger reserves. When I say too small I mean are individual reserves large enough to contain sufficient numbers of tigers to maintain sufficient genetic diversity for health reasons? The Siberian tiger is a case where there are about 400 tigers but the breeding capability is about 35 due to inbreeding (inbreeding of wildcats). If not the tiger is doomed whatever happens, almost.

We are told1 that tourism is to be phased out in the core regions of the 37 Indian tiger reserves. Rajesh Gopal3 makes the point that reserves are just that, places that are designed to protect the tiger. Excessive tourism undermines that objective. Outside the reserves tourism is to be tightly regulated and people living inside the core tiger habitats are to be removed. I have heard of difficulties removing people in other iniatives. And this iniative does not address perhaps the biggest threat to the tiger: the illegal trade in body parts for the oriental medicine market. This can only be stopped at the demand end not by protecting the reserves as it seems impossible to protect them from poachers judging by past failed attempts. There is also the question of corruption. Sometimes officials paid to protect the tiger do the opposite and take bribes, I allege, from poachers. The greatest threat of all (and this applies to all wildcats) is us. Our inexorable and unregulated propensity to procreate will kill the tiger off as there is not enough space for tiger and human.

The often quoted figure of 1,411 remaining Bengal tigers in India is, let us not forget, an estimate based on scats and camera trap data. Estimates in the past have proved inaccurate and the inaccuracy is always on the optimistic side – strangely. It is entirely possible that the current number of Bengal tigers in the Indian tiger reserves and outside them is substantially less, at say 800. Some experts claim that this is the case. They also predict that the tiger will be extinct in the wild in five years – yes five years! The tiger is already either extinct or becoming extinct in 16 of the reserves2. One hundred years ago there were 40,000 in India at a time when the one of the favorite pastimes of the Raj-era rich was to shoot them (tiger theats).

I have said it before. The tiger belongs to the world. We must help India if it will accept our help. It is essential, I think, for us to be inspired and awed by the sight of a tiger in the wild, the world’s most popular wild animal. But we are more interested in a football club with the word, ‘tiger’ in its name.

In my view the tiger is not being loved to death. It is being talked to death. Can people please actually do something that works to save the tiger?

Killing tigers in self defence

3. He is head of India’s National Tiger Conservation Authority