In the USA, there are some insects that are more likely to sting a cat. The domestic cat is naturally curious and a predator. Wild cats (the domestic cat ancestor) sometimes feed on insects so we can see that there is a real potential for an outdoor domestic cat to be stung by a poisonous insect [see plants poisonous to cats].

Associated: Why do cats eat bugs? ANS: because they are nutritious!

The stings of yellow jackets, wasps, bees and ants can cause a painful swelling at the site of the sting. The domestic cat tends to be stung around the face and mouth or inside the mouth. The paws and neck may also be stung. If a cat is stung a lot he may go into shock because of the toxins. Sometimes a cat may suffer from anaphylactic shock due to a hypersensitivity to the toxin because the cat was exposed in the past; although this is rare.

The stings of black widow, brown recluse spiders and tarantulas are toxic to cats. The cat feels a sharp pain at the site of the sting. Thereafter, the cat may become excitable, have chills, fever and laboured breathing. The cat may suffer from shock and seizures. The black widow spider bite may cause early paralysis in the cat. The majority of cats will be killed by these bites. However, there is an antivenin which I will presume that a local veterinarian will keep in stock. If it can be obtained quickly enough it may save the life of a cat.

Tarantula bites are usually not that serious apparently but the barbed hairs that the tarantula drops can be irritating to the mucous membranes (in the mouth for example).

The brown recluse spider bite causes a blister and then a bull’s-eye lesion. In a week or two the skin in the area of the bite  will die and the wound will take a long time to heal. In addition, the cat may suffer from a fever, joint pains, vomiting and possibly seizures. There may be kidney failure and blood disorders. The cat may die.

Centipedes and scorpions can also be a problem for the domestic cat and the stings of these insects cause a local reaction and sometimes a severe illness. The bites heal very slowly. Poisonous scorpions, in the USA, are only found in southern Arizona. 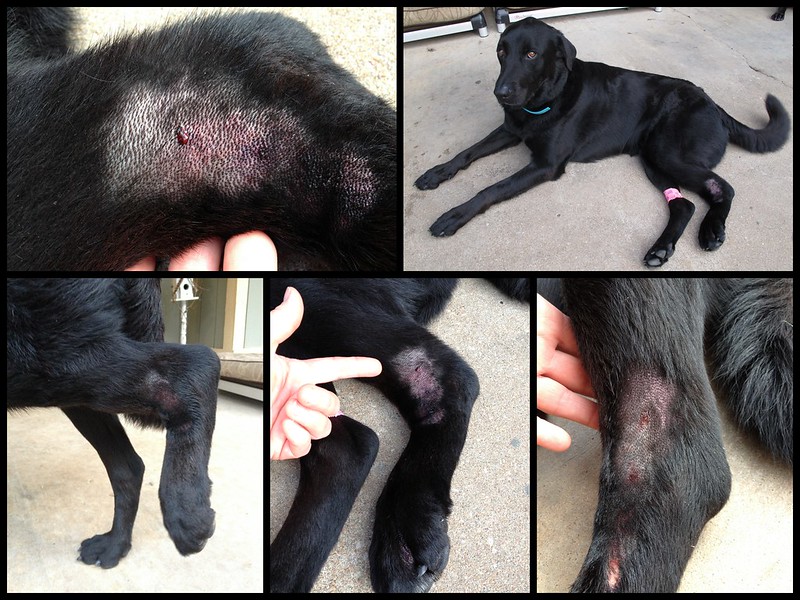 Two weeks later, and Moose’s leg is still healing. Slight swelling on foot, and the wound has actually opened up, due to necrosis. Now we are having to keep it clean with saline solution, and trying to keep bandages on it, soaked in Betadine, changing dressings often, to encourage bleeding from the tissues.

Nearly all bites by a snake are to the cat’s head and legs. When a cat is bitten by a snake on the body it is usually fatal. There are 4 poisonous varieties of snake in the USA: cottonmouth, rattlesnake, copperhead and coral snake.

The first 3 listed snakes are about 4-8 feet in length, they have triangular heads and retractable fangs in the upper jaw. The bite from the snakes may cause a bleeding puncture wound in the skin. These are caused by the snake’s fangs. The fanged marks may be difficult to find because of the coat. There may be sudden severe swelling, redness and bleeding in the skin. The cat will immediately suffer from severe pain. Apparently, severe venom poisoning may sometimes not result in a local reaction at the site of the bite. 25% of poisonous snake bites do not inject venom therefore do not produce a local reaction.

The signs of a snakebite in a cat from these three snakes vary depending on a number of factors but include at first: extreme restlessness, drooling, panting and weakness. These symptoms are followed by diarrhoea, depressed breathing, collapse, possibly seizures, shock and ultimately death in severe cases.

As for the coral snake, at the side of the bite there is less swelling and redness than for the other snakes mentioned. The cat may feel mild or very severe pain. The amount of pain depends on the amount of venom injected. The behaviour of the cat after a bite reflects the fact that the venom of the coral snake affects the cat’s nervous system. Accordingly, the cat shows weakness and paralysis. The cat will vomit. There may be diarrhoea, incontinence, paralysis, convulsions and coma. Not all cats die as a result of a coral snake bite.

Two species of lizard are also dangerous to the domestic cat. There are both found in south-western states of the USA. The bite of these lizards could be fatal to a cat. The species are: Gila monster and Mexican bearded lizard.

I’m not going to go over treatments etc. as that is the role of a veterinarian. Naturally, as soon is a cat caretaker realizes that her cat has been bitten by a poisonous insect, snake or lizard she should contact a veterinarian and take emergency action. It may be useful to have a cat first aid kit in the kitchen. Speed is obviously of the essence in treating a cat that has been bitten by a poisonous creature.